If you've read the article 666 and the Culmination of Years, then you know how that it was revealed that President Donald Trump's conception date would have been on or around the Hebrew "Day of Trumpets" in 1945. His conception date was determined by subtracting 280 days from the date of his birth. A man who was allowed to become President of the United States by YaHuWaH Elohim, who's name is Trump and was conceived on the Day of Trumpets, should signal our attention to investigate further. See graphic below. 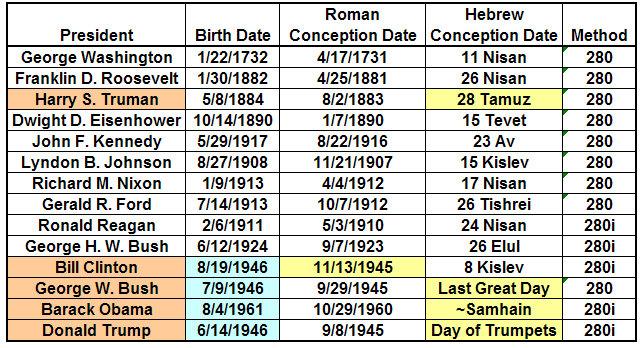 Above: The conception date of President George W. Bush was determined to be on or around the Hebrew appointed "Last Great Day" in 1945.


These are facts. The ideas to research various topics, such as the birth and conception dates of the Presidents, come to me from our heavenly Father, YaHuWaH Elohim. He speaks to us in very gentle ways, revealing secrets that anyone of us can find if we follow His instructions. YaHuWaH Elohim knows where He has placed information for us to find in these last days, and He reveals the locations of these hidden treasures to us. Certain information can be very valuable to the person who has it. Governments hide the precious secret information that they acquire, and reveal it to a select trusted few who have the "need to know".


In the course of investigating the conception and birth dates of the Presidents, YaHuWaH Elohim revealed information that included myself in the historical timeline. The information involves my birth date and also the Hebrew meaning of my name, Saffell.


There are many accounts in the bible of people being assigned certain names by YaHuWaH Elohim. Our Messiah Himself was assigned the Name Yehoshua ( English - Joshua, or Jesus via the Greek language) by an angel that visited Mary. The Hebrew name Yehoshua means "Yah's Salvation", which was a description of the mission of the Messiah to be the Savior of the world.


John the Baptist was named by angelic proclamation. The prophet Hosea was instructed by YaHuWaH Elohim to name his children by certain names. The names of Hosea's children were to be signs of the coming judgment of YaHuWaH Elohim.


Hosea 1:2 The beginning of the word of YaHuWaH by Hosea. And YaHuWaH said to Hosea, Go, take unto thee a wife of whoredoms and children of whoredoms: for the land hath committed great whoredom, departing from YaHuWaH.

3 So he went and took Gomer the daughter of Diblaim; which conceived, and bare him a son.

4 And YaHuWaH said unto him, Call his name Jezreel; for yet a little while, and I will avenge the blood of Jezreel upon the house of Jehu, and will cause to cease the kingdom of the house of Israel.

5And it shall come to pass at that day, that I will break the bow of Israel in the valley of Jezreel

6 And she conceived again, and bare a daughter. And Elohim said unto him, Call her name Loruhamah: for I will no more have mercy upon the house of Israel; but I will utterly take them away.

7 But I will have mercy upon the house of Judah, and will save them by YaHuWaH their Elohim, and will not save them by bow, nor by sword, nor by battle, by horses, nor by horsemen.

8 Now when she had weaned Loruhamah, she conceived, and bare a son.

9 Then said Elohim, Call his name Loammi: for ye are not My people, and I will not be your Elohim.

The Author is in the Timeline


It was after YaHuWaH revealed the information in the last article to me that I was nudged to investigate further. I found that my name and birth date fit into the previous article in an unexpected way indicated in the graphic below.

Previous articles have revealed how that the 36th year from conception in the lives of presidents Trump, Bush, and Clinton, fell in 1981-1982. And how that the year 1982 was 2520 years from 539 BC and the Handwriting on the Wall event that spelled the demise of ancient Babylon. The number 2520 was encoded into the Handwriting on the Wall. The three presidents in the graphic above were in the 36th year of their lives from conception in 1982. This links them and modern Babylon the Great to ancient Babylon via the Babylonian Magic Square and it's 36 numbered gods (which total 666) and the number 2520.


Note that the author, Saffell, is listed in the timeline above. The author, and the other people, in the graphic above are signs concerning modern Israel and Babylon the Great. If I had a choice, I'd rather not be a sign associated with Babylon the Great and the number 666, but I don't have a choice. YaHuWaH Elohim has revealed this information to me and now I find I'm included in the mix. Yikes!

The Saf, The Saph, and the Threshold


In high school I was nicknamed "the Saf" by some fellow students. I had often wondered about the Hebrew meaning of my name, but didn't look very far into it. All I could find in the bible was that there was a man named Saph, the son of the giant. I didn't especially like my name being associated with a giant, the descendant of a fallen angel.


The following information courtesy of abarim-publications.com -


The meaning of the Hebrew word Saph is "threshold" or "outer border". A fire beacon was commonly used to mark the Saph, the outer border.


Example: The flaming sword at the entrance to the garden of Eden.


Forms of the word Saph describe the division of one continuum into a greater and lesser continuum by means of a divider, such as ancient United Israel being divided into Judah and Israel after the death of King Solomon.

Man himself was divided into male and female by his Creator Elohim.


A larger article concerning the meaning of the word Saph is also available from abarim-publications.com here.


In ancient times the threshold, the bottom of a door, was a very special place. The threshold of the door to a home was also an altar of sacrifice.


In ancient times, when a guest arrived an animal would be slaughtered at the threshold of the home and the animal's blood would be shed on the threshold. When the guest entered the home, he would step over the bloody threshold. By stepping over the bloody threshold and entering the home, the guest had just agreed to a covenant relationship of peace and protection with the owner of the home.


Be aware that on the Passover night in Egypt, a lamb was slaughtered at the door of each Israelites home and its blood applied to the lintel and door posts. YaHuWaH Elohim Himself stepped over , passed over, the blood of the lamb on the threshold of each home and He entered each home in order to protect the inhabitants as the destroyer passed by.

Exodus 12:23 For YaHuWaH will pass through to smite the Egyptians; and when He seeth the blood upon the lintel, and on the two side posts, YaHuWaH will pass over the door (threshold), and will not suffer the destroyer to come in unto your houses to smite you. 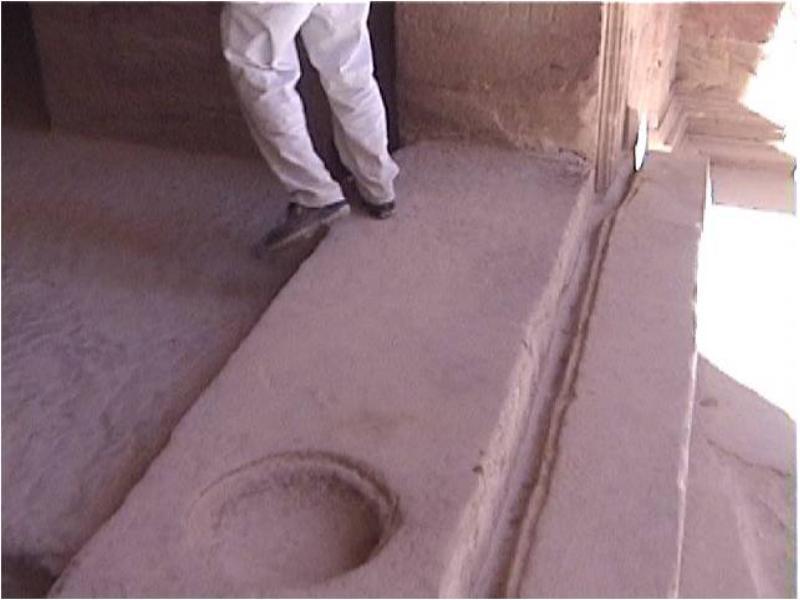 Above: The basin in the threshold above was a common item built into ancient thresholds. The basin would catch the blood of the animal that was slaughtered at the threshold.


The word Saph was sometimes translated "Basin" and even "Cup" in the bible because there was a Basin or "Cup" built into almost every home's threshold.


Zeccariah 12:1 The burden of the word of YaHuWaH for Israel, saith YaHuWaH , which stretcheth forth the heavens, and layeth the foundation of the earth, and formeth the spirit of man within him.
2 Behold, I will make Jerusalem a cup (Saph, threshold) of trembling unto all the people round about, when they shall be in the siege both against Judah and against Jerusalem.3 And in that day will I make Jerusalem a burdensome stone for all people: all that burden themselves with it shall be cut in pieces, though all the people of the earth be gathered together against it.


Note that the threshold was a part of the foundation (mentioned in verse 1 above). The cup in verse 2 is the basin in the Saph, the threshold, that catches the blood of the slaughtered animal. Th sacrifice that is slaughtered to provide the blood on the threshold is the united group of people who gather themselves together against Jerusalem and are cut in pieces.

Below is a graphic illustrating various threshold events.

Above: The author's name and birth timing in the graphic above appear to be an integral part of the end of the age information being given to him by his heavenly Father.

The Saff, Guarding the Threshold

Above: The word saphaph in ancient pictorial Hebrew was the picture of a thorn and two mouths. Note that there was a burning thorn bush in Exodus 3 at the threshold of Moses and Aaron (two mouths) leading Israel out of Egypt. The burning thorn bush is a fire beacon (mentioned further above), marking a 40 year border or division in the life of Moses, he being 80 years old at the time.


There's another application of Saph, the word Saphaph, Sff, used once in scripture in Psalm 84:10.


Psalm 84:10 For a day in Thy courts is better than a thousand. I had rather be a doorkeeper in the house of my Elohim, than to dwell in the tents of wickedness.


The word doorkeeper in Psalm 84:10 is Saphaph, Saff, which means "to guard the threshold".


As we approach the end of a 70 year period in the history of modern combined Israel and Babylon, we appear to be approaching the threshold of significant change where the two will divide. There will be bloodshed on the threshold as the sacrifice is cut in pieces.


Because prophecy can have multiple fulfilments, the scripture below is cause for concern when compared with the 70th year timeline in the graphic above:


Jeremiah 25:12 And it shall come to pass, when seventy years are accomplished, that I will punish the king of Babylon, and that nation, saith YaHuWaH , for their iniquity, and the land of the Chaldeans, and will make it perpetual desolations.
13 And I will bring upon that land all My words which I have pronounced against it, even all that is written in this book, which Jeremiah hath prophesied against all the nations.
14 For many nations and great kings shall serve themselves of them also: and I will recompense them according to their deeds, and according to the works of their own hands.

There's more to the above graphic concerning the author that hasn't been included. It's the expiration of a 40 year timeline in early 2018 concerning my salvation experience in 1978. It was the most horrific time of my life, and I wouldn't want anyone to have to experience what I experienced.


I hope we all will understand the spiritual truths of the blood covenant at the doorway to our "temples", and understand the protection we have when YaHuWaH Elohim sees the blood of YAHUSHUA Messiah on that door and steps inside our temples to protect us from the destroyer.


The biblical type, the symbol, of our salvation, was given at YaHuWaH 's commanded Passover, not the pagan festival of Ishtar. We need to actively honor our heavenly Father's authority and refuse to observe man's Easter with its fertility celebrations.