It's All About The Walls

The previous article titled "Six Hundred, Threescore, and Six" noted that there were 666 months from the Apollo 11 moon walk on 7/21/1969 to the 1/20/2025 USA Presidential inauguration date.


It was also noted that the Apollo moon program was named for the Greek god Apollyon, Hebrew - Abbadon, the king of the bottomless pit mentioned in the book of Revelation. Apollyon and his demonic armies will be loosed at the end of the age in order to harrass those who don't have the seal of YaHuWaH Elohim.

The Two Kinds of Months


The word "month" is derived from the word "moon". The moon appears to move through the sky in a regular fashion. The original month was probably the measure of the number of days from the observance of one new moon to another new moon. A precisely measured lunar month is 29.53059 days long.


The sun also appears to move through the sky, producing day and night, a single day. In addition to producing day and night, the sun also appears to regulate the seasons in a longer period of time that we call a year. At the end of each day, the sun appears to set on the western horizon at a slightly displaced position from the previous day's sunset. The measure of a year from today's date is the amount of time it takes for the sun to set on the horizon at the same place and in the same season that it did today. A precisely measured year is 365.24219 days long.


The Roman Gregorian calendar currently in general use throughout the world has months of 28, 29, 30, and 31 days. The leap day month of 29 days usually occurs only once every 4 years, but once every 400 years an additional leap day is introduced. The Gregorian calendar is structured this way in order to keep the seasons synchronized with the same calendar dates from year to year through the centuries.


The Gregorian calendar was divided into 12 unequal parts called months (named after the moon), probably because the moon made approximately 12 circuits of the earth over the span of one solar year.


The two kinds of months are:


The current Jewish Hillel calendar is a lunar based calendar invented after the dispersion of Israel into the nations. It has additional astronomical data introduced, along with various dating laws and a leap month every 3 1/2 years or so, in order to keep the Hillel calendar in a general synchronization with the seasons.


The actual sighting of the New Moon to determine the beginning of the new lunar month was used by the Jewish priesthood in Jerusalem around 30AD. YaHuShua Messiah had no problem with this method of determining the time for the observance of YaHuWaH 's appointed Feast Days. The Hillel calendar now in wide use by Judaism was invented centuries later.


It's interesting to note that the name usually translated Lucifer in Isaiah 14:12 is actually the word Hilel in Hebrew. Lucifer is a latin name.


Isaiah 14:12 How art thou fallen from heaven, O Lucifer, son of the morning! how art thou cut down to the ground, which didst weaken the nations!
13 For thou hast said in thine heart, I will ascend into heaven, I will exalt my throne above the stars of God: I will sit also upon the mount of the congregation, in the sides of the north:
14 I will ascend above the heights of the clouds; I will be like the most High.


Isaiah 14:12 How art thou fallen from heaven, O Hilel, son of the morning! how art thou cut down to the ground, which didst weaken the nations!
13 For thou hast said in thine heart, I will ascend into heaven, I will exalt my throne above the stars of Elohim: I will sit also upon the mount of the appointed times, in the sides of the north:
14 I will ascend above the heights of the clouds; I will be like the most High.


The humanly invented Hillel calendar changes the way the appointed times and Feasts of YaHuWaH Elohim are determined and observed by the Jewish people today. The Hillel calendar is often in disagreement with the sighting of the new moon method of determining the timing of appointed Feast days, a method that YaHuShua Himself found no problem with in the first century. 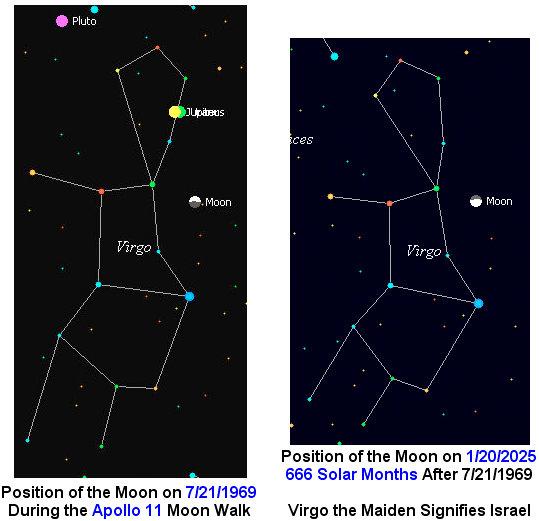 
The thought came to me as I was awaking from sleep recently to also look into lunar months. There are a different number of days in 666 lunar months than there are in 666 solar months.


The Jewish people have relied on the lunar month for thousands of years.


Below is a graphic showing the results from adding 19,667.372 days to the time of the Apollo 11 lift off launch from the moon: 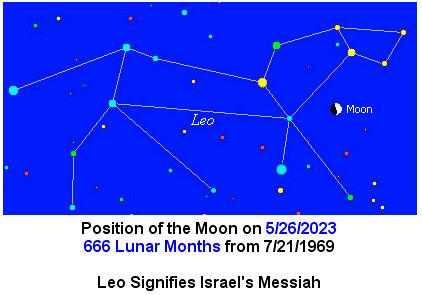 
What are the odds that the exact date midway between the two dates mentioned above would be of any significance? 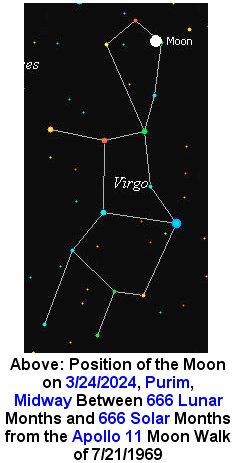 
Our Creator, YaHuWaH Elohim, has ordained the above timeline in the heavens to be working in agreement with the public affairs of the nations of Israel and the United States. We are assured that He is well aware of our increasingly perilous situation on the earth, and that He has everything under control.

Abortion and the Ghoul that Eats Children
666 Lunar Months and 666 Solar Months from Apollyon 11
Six Hundred, Threescore, and Six
View on Mobile