There has been major media attention given recently in early 2019 to the institution of full term abortion laws.


YaHuWaH Elohim was well aware of what would be happening at this time in history when He created the heavens and the earth.


This article will explore some of the signs given by our Creator that He was, and is, well aware of our current moral situation.

YaHuWaH Elohim has already spoken to mankind via the bible concerning the consequences of one human taking another human's life.

The signs revealed in this article should strengthen our faith in our heavenly Father as they witness to His supernatural abilities to order events in the heavens and in the affairs of mankind in a timely fashion.

The United States Supreme Court issued a decision on 1/22/1973 concerning abortion in the much publicized Roe vs Wade case.

Let's first look at the meaning of the names Roe and Wade involved in the Supreme Court decision mentioned above.

The meaning of the word "roe" is "a mass of eggs in the ovaries of fish".

The meaning of the word "wade" is "to walk through water".

A baby originates from an egg in the mother and passes through the water (the embryonic sac breaks) to be born.

The word roe is a mass of eggs in not just any animal, but a fish in particular.

The sign of a Christian from early times has been that of a fish.

Above: The measure of a fish from ancient Greek mathematics, alluded to in John chapter 21 and the catch of 153 fish.

The supernatural spiritual offspring of a Christian who witnesses to an unsaved person is a newly born again believer. But the future believer in Messiah must be born physically first before he or she can be "born again" spiritually. The sin of abortion removes any chance of a spiritual new birth later in life.

The sign encoded into the names Roe and Wade by YaHuWaH Elohim involving fish eggs and passing through water indicates that the subtil purpose of the Supreme Court decision was to keep future believers in Messiah from being born.

The members of the Supreme Court of the United States probably had no idea that they were being subtily influenced by the enemy of YaHuWaH Elohim in their decision of 1/22/1973. Such is life on the earth at this time, but things will change.

If a human is ripped apart in the womb, or killed as it's being birthed physically, it will definitely have no chance of experiencing the spiritual new birth, the born again second birth mentioned by YaHuShua Messiah.

A strange thing happened in the heavens in October of 2007. A dim comet named 17P Holmes suddenly increased in brightness by 500,000 times over the space of a few weeks.

Astronomers were surprised by the massive sudden increase in brightness. They received another surprise when the recently brightened comet then passed over a star known as AlGol in the constellation Perseus on 1/22/2008.

The star AlGol is known as the Ghoul star.

The dictionary defintion of a Ghoul is "A creature that eats stolen corpses and children".

We'll now see how our Creator, YaHuWaH Elohim, has ordered His universe to indicate to us today that he is well aware of what's going on with respect to the abortion sins being commited today by mankind. 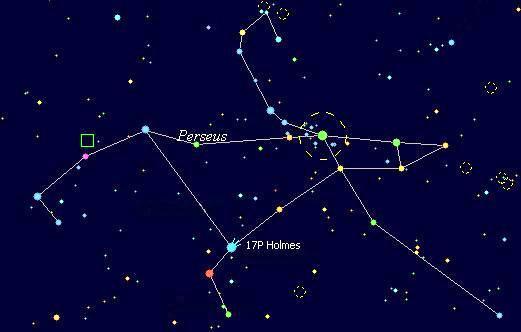 Signs on the Earth Coordinate with the Sign in the Heavens

Below: A graphic showing the timely relationships between the beginning of the 36th year from the Roe vs Wade decision, a 777 Dow Jones stock market point drop exactly 36 inclusive weeks later, and the election of Barack Obama as President of the United States 36 days after the 777 point DJIA drop.


The graphic below indicates the 36th year, 36 weeks, and 36 days, all adding up to President Obama's election. The number 666 is written all over modern Babylon and Barack Obama. 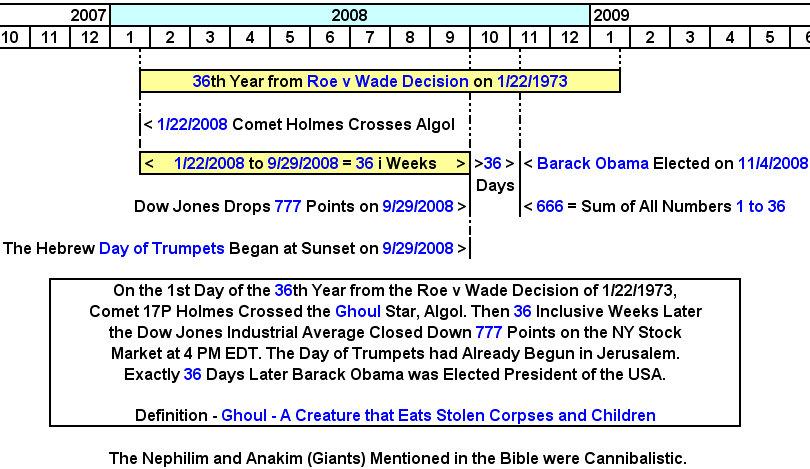 Below: A graphic showing the date timing of Governor Cuomo of the State of New York signing a new more liberal abortion law into existence.

Above: Again, a Ghoul is a creature that eats stolen corpses and children. The words "corpses" and "children" perfectly describe the gruesome outcome of the abortion process.

Our Creator, YaHuWaH Elohim, has ordered His creation in a way that presents us with a message in the heavens that is perfectly coordinated timewise with the current affairs of earthly governments and human institutions. We are assured that He knows everything that's going on, and will call everyone involved into account.

The call for repentance goes out. YaHuWaH is merciful and He assures us that repentance will be met with forgiveness. The unrepentant may unfortunately be destroyed in the same way that he or she has destroyed others.

abortion and yahuwah elohim and yahushua with signs in the heavens

666 Lunar Months and 666 Solar Months from Apollyon 11
Latest Articles
Home Page
It's All About The Walls
Six Hundred, Threescore, and Six