666 and the Culmination of Years

The Handwriting on the Wall


On the evening of 10/11/539 BC the King of Babylon was having a wine party with the governors of Babylon's provinces. During the party, the King decided to bring in the golden cups that had been taken from the Temple in Jerusalem and drink wine from them. Those cups had been set apart, sanctified, unto YaHuWaH Elohim El Shaddai, the Creator of the universe.


As the king and his friends began to drink, the form of a man's hand appeared and began writing a message on the wall. The King's knees began to knock together, he was so frightened. The message was in a foreign language. Eventually the Hebrew prophet Daniel was summoned and he was able to read and interpret the strange message for the King.


Along with the interpretation that the King would lose his kingdom, there was a numeric value encoded into the message "mina mina tekel upharsin". The message "mina mina tekel upharsin" means "50 shekels, 50 shekels, 1 shekel, divide". The encoded value was 126 shekels, arrived at by adding the 2 minas and the 1 shekel and then dividing a mina, 50+50+1+25 = 126. The 126 shekels are valued in the bible at 20 gerahs each, resulting in a final value of 2520 gerahs.


By knowing the date of the Handwriting on the Wall that indicated the doom of ancient Babylon that very night, 10/11/539 BC,we can add 2520 years and see where we end up.


Be aware that wine is symbolic of blood, and that drinking wine from cups sanctified unto YaHuWaH Elohim is symbolic of slaughtering and spilling the blood of the people who are set apart unto Him. This symbolism applies to modern Babylon the Great, and it's king Bill Clinton who slaughtered at least 76 people dedicated to YaHuWaH Elohim in Waco, Texas, on 4/19/1993. The Branch Davidians had observed Passover and the Feast of Unleavened Bread about 2 weeks before their deaths at the hand of Babylon's king.

The Babylonian Magic Square and 666


I don't like researching foreign and ancient religions and Kabbalism, etc., but unfortunately they are relevant to our world today in many ways that most of us are unaware of. 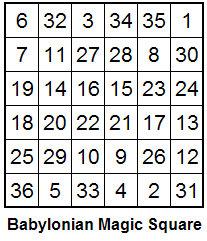 Above: The ancient Babylonians had 36 gods. They numbered their gods and made amulets containing the above numerical matrix. They wore the amulets on a necklace to protect themselves from evil, sort of like a Saint Christopher's Medal or a Cross worn by Christians.

Above: Ancient Babylonian Magic Square Amulet in Latin showing the Constellation Leo with the Sun and the moon on one side and "666" on the other side.


Keep in mind for future reference that on 8/21/2017 there will be a total solar eclipse that will paint a stripe across the United States. During that eclipse the sky will go dark and the constellation Leo will appear with the eclipsed sun, the moon being directly in front of the sun, both located in Leo right next to the King Star Regulus. 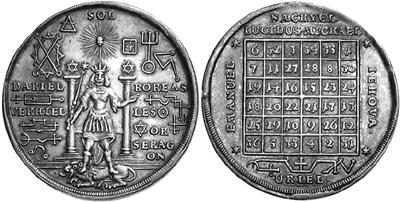 Above: Notice the "Star of David" symbology on this Babylonian Magic Square amulet and the writings, IEHOVA, EMANUEL, and URIEL.


Uriel is mentioned in the older Septuagint in Isaiah 21:8, but Uriel's identity is hidden in the Masoretic text, being translated "lion" instead because of a possible spelling error in the manuscripts.


"Uriel" is Greek for the Hebrew "Uriah", the "Light of Yah" who is called to the watchtower to announce the fall of Babylon. The "light of Yah" burst forth from a tower in New Mexico on 7/16/1945 in the very first test of an atomic device. Uriah, the Light of Yah, would signal that two messengers were approaching.


Remember that the value 2520 was encoded into the "Handwriting on the Wall" in 539 BC, and that the very first atomic test named "Trinity" on 7/16/1945 was the initial result of the top secret Manhattan Project of World War II.


A very important biblical truth to remember is that YaHuWaH Elohim declares the end from the beginning.

The graphic below indicates the 2520th prophetic year from the "Handwriting on the Wall" beginning on 8/4/1945, and the conception dates of three Babylonian "kings" during that prophetic year.


Remember the Babylonian Magic Square and its 36 parts that add up to 666. There was an emphasis on the "36" in 1981-1982. Ronald Reagan became president on 1/20/1981. He was the very first President to be sworn in on the west side of the Capitol building, facing the phallus of Ba'al, the "Washington Monument". On 2/11/1981 William A. Wilson was named the President's personal representative to the Holy See. About a month later his wife Nancy Reagan began to consult astrologer Joan Quigley on behalf of her husband. In 1984 official diplomatic ties were restored between the United States and the Vatican, with Wilson being named the U.S. Ambassador to the Holy See.


Be aware that "Pontifex Maximus" was the title of the high priest of ancient Babylon. Rome conquered ancient Babylon and the Priests moved to Pergamum, described as the location of Satan's seat in the bible. From Pergamum the Babylonian Priests traveled to Rome where their title "Pontifex Maximus" was passed to the Roman Caesars. The Roman Caesars transferred the title to the Popes as the physical Roman Empire was dying. The title Pontifex Maximus is carried today by Pope Francis. It links him back through millennia to the religion of ancient Babylon and to the 36 part Magic Square and the number of the beast 666.


Below: A graphic showing the end of 70, 36 year periods from 539 BC. It shows the 2520th year from the Handwriting on the Wall that spelled the doom of ancient Babylon. It also shows three United States presidents who have the Babylonian Magic Square and 666 written into their very lives through their birth dates.


Revelation 18:6 Reward her even as she rewarded you, and double unto her double according to her works: in the cup which she hath filled fill to her double.


The verse above is concerned with rewarding Babylon double. Remember the announcement that Babylon is fallen, is fallen, is a double occurrence, like the twin trade towers falling on 9/11/2001.


Below is a graphic that shows these events and some other related information.

The above information links the United States (through its recent Presidents) and the Vatican (through the Pope) with the biblical number of the beast 666, and the pagan religions of ancient Babylon. They appear to be coming to fruition timewise.

666 Babylon Daniel and the United States in prophecy