Mitt Romney and the Coming Temple

The Far Out Spacecraft Events


Some notable events in space exploration occurred in late 2018 and early 2019.


On 12/31/2018 the OSIRIS REx spacecraft began orbiting the asteroid Bennu. Here's a link to an article concerning this space mission titled "Out of Egypt at 27,000 MPH".


The next day, on 1/1/2019 at 00:33 EST, just after the beginning of the Roman Calendar New Year, the New Horizons spacecraft made a first in history as it zipped past an object named Ultima Thule (pronounced too-lee) about 4 billion miles from earth. The name "Ultima Thule" means "farthest point". The event was a global news event, and I wondered what the "farthest point" naming might mean in a spiritual sense.


Then the next day, on 1/3/2019 (1/2/2019 USA date, 1/3/2019 in China), China's Chang'e 4 spacecraft became the first spacecraft to successfully land on the far side of the moon and also communicate from there. That was a second reference to the word "far", both involving globally news worthy first events for spacecraft, all in the course of just 3 days.


I continued to wonder what the spiritual message was in these two seemingly unrelated events. There is scripture in Isaiah chapter 13 that tells us that YaHuWaH Elohim will come from the "end of Heaven" to destroy the earth and remove all the sinners from it. The end of Heaven is probably about the farthest point we might think of.


Then another event occurred that rocked the news outlets. Senator Mitt Romney made a remark about President Donald Trump that caused some waves in the political arena. Mitt Romney assumed his position as a Senator from Utah on 1/3/2019, in context with the spacecraft mentioned above achieving their "first's" and "far" away goals.


Life begins at conception. At conception, we are complete genetically, and we begin growing and forming (living). It's significant therefore that calculated dates of conception appear to be more relevant in the life histories of certain prominent people than their birth dates.


The article of 12/26 2018 titled "The Two Presidents" showed that the calculated conception dates of globally prominent national leaders President Donald Trump and President Recep Erdogan had the fingerprints of YaHuWaH Elohim on them.


The thought came to me to investigate Mitt Romney's birth and conception dates to see if there was any coherence with YaHuWaH Elohim's set apart days (Feast Days) or events in the history of the nation of Israel. Below is a graphic showing the result:


Note that if we had subtracted 280 non inclusive days from Mitt Romney's birth date, we would have arrived at 6/5/1946 for Romney's conception on the Jewish calendar Feast of Shavuot day 1, and the Six Days War would begin on the 21st anniversary of Mitt Romney's calculated conception date.


Inclusive counting is used for this report because that's the way dates were counted in the bible. A part of the very first day counts as day 1, a complete day. That's how inclusive counting works.


Below is a graphic showing Mitt Romney's calculated conception date and the beginning of the Israeli Six Days War on 6/5/1967 and then the taking if Jerusalem on 6/7/1967.

Above: Mitt Romney's conception date in relation with the taking of Jerusalem on 6/7/1967.

Here's a link used in researching the LDS Church: https://en.wikipedia.org/wiki/Second_Coming_(LDS_Church)

And here's a quote by Bruce R. McConkie, a member of the Quorum of the Twelve Apostles of the LDS Church, from the above LDS Church link:


More recently, Bruce R. McConkie stated, "Who are those 'that are far off' who shall come to Jerusalem to build the house of the Lord? Surely they are the Jews who have been scattered afar. By what power and under whose authorization shall the work be done? There is only one place under the whole heavens where the keys of temple building are found. There is only one people who know how to build temples and what to do in them when they are completed. That people is the Latter-day Saints. The temple in Jerusalem will not be built by Jews who have assembled there for political purposes as at present. It will not be built by a people who know nothing whatever about the sealing ordinances and their application to the living and the dead. It will not be built by those who know nothing about Christ and his laws and the mysteries reserved for the saints. But it will be built by Jews who have come unto Christ, who once again are in the true fold of their ancient Shepherd, and who have learned anew about temples because they know that Elijah did come, not to sit in a vacant chair at some Jewish feast of the Passover, but to the Kirtland Temple on April 3, 1836, to Joseph Smith and Oliver Cowdery. The temple in Jerusalem will be built by The Church of Jesus Christ of Latter-day Saints. 'They that are far off,' they that come from an American Zion, they who have a temple in Salt Lake City will come to Jerusalem to build there another holy house in the Jerusalem portion of 'the mountains of the Lord's house.'"

When I saw the above information and the words "far off" then I understood the spiritual nudging that YaHuWaH Elohim was giving me regarding of the Ultima Thule "farthest point" flyby and the Chinese landing on the "far side" of the moon.

I hope you can comprehend the gravity of the prophetic message above by Bruce R. McConkie.


Below is a graphic that shows a significant relationship between the beginning fo Mitt Romney's life at conception and certain signs placed in the heavens at Creation by YaHuWaH Elohim. 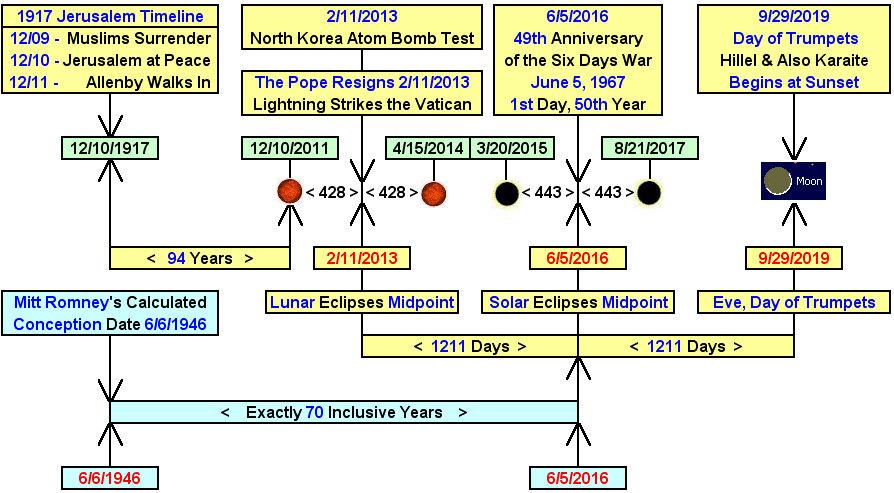 Above: The beginning of Mitt Romney's life at conception included along with information from past articles concerning Israel and Jerusalem.


Below is a graphic showing 5 "X''s, ancient paleo Hebrew tavs, ordained at creation by YaHuWaH Elohim to be placed on the earth in our times using total solar eclipses.

Below: A graphic showing the beginning and ending "Tavs" of the above 5 tavs. 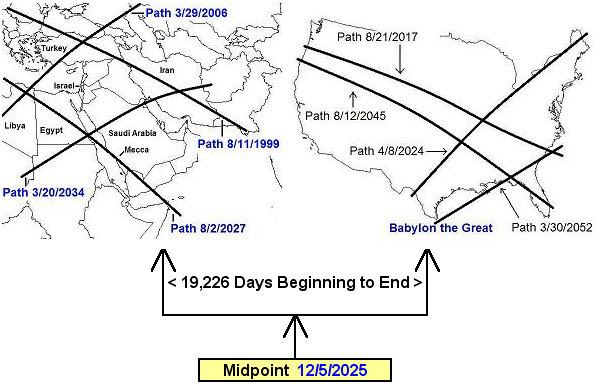 Above: The first and last of the total solar eclipse tavs, showing the regions of the earth marked by them, and the central date of 12/5/2025.


Below: A graphic showing Mitt Romney's conception date relationship with the midpoint date of the above solar eclipses ordained by YaHuWaH Elohim at creation.

Above: The midpoint date of the Middle East and USA solar eclipses, 12/5/2025, is also the precise center date of Mitt Romney's 80th year from conception. Note that Moses was in his 80th year when he was chosen by YaHuWaH Elohim to lead HIs people out of Egypt.


Our creator, YaHuWaH Elohim, has revealed to us His hand in the affairs of nations. The information above attests to His very existence and His supernatural ability to order all of creation and ordain the lives of those who inhabit it.


According to the information further above, Elijah visited Joseph Smith and Oliver Cowdery on Easter Sunday April 3, 1836. The Elijah I know would probably have been wielding a whirling sword at a festival of Ishtar. Ezekiel 8 & 9


Senator Romney was named to the Senate Committee for Foreign Relations on 1/4/2019.