YaHuWaH Elohim called His son out of Egypt.


Hosea 11:1 When Israel was a child, then I loved him, and called My son out of Egypt.


The above scripture is a historical reference to the 12 tribes of Israel being led out of Egypt by Moses centuries before Hosea lived.


It was also a prophecy of YaHuShua the Messiah, YaHuWaH 's Son, returning from Egypt many centuries after Hosea died.


Matthew 2:14 When he arose, he took the young child and His mother by night, and departed into Egypt:
15 And was there until the death of Herod: that it might be fulfilled which was spoken of YaHuWaH by the prophet, saying, Out of Egypt have I called My son.

The Signs of OSIRIS REx and Bennu


The Significance of the Names Involved


OSIRIS REx is a NASA space mission that was launched on 9/8/2016. The object of the OSIRIS REx space mission is to fly to the asteroid 101955 Bennu and collect a sample of its dust and gravel and return the sample to earth for examination.


The first things we will look at are the names involved. Osiris and Bennu are both Egyptian names.


OSIRIS is the Egyptian god of the dead and the underworld. The latin name REx denotes a king. Info link: https://en.wikipedia.org/wiki/Osiris


The OSIRIS REx spacecraft nemenclature therefore signifies a "god" who is also the "king of the dead".


Bennu was the name of an ancient Egyptian god linked with creation and rebirth. The Egyptian name Bennu means "Eagle" and "to rise in brilliance". Bennu may have been the source of the Phoenix, the Greek mythical bird of fire that arises in rebirth from the ashes of destruction.

The Significance of the Timing


The OSIRIS REx mission was launched on 9/8/2016. The spacecraft achieved a velocity of about 19,000 MPH after leaving the vicinity of the earth. After traveling in a circular path for over a year the spacecraft approached the earth in order to receive a gravity boost, a slingshot effect, from the earth.


The OSIRIS REx spacecraft approached the earth on the Hebrew Day of Trumpets, 9/21/2017 (9/22/2017 Karaite), initially passing over Brazil at about 19,000 MPH. Note that the Day of Trumpets is a special Sabbath day ordained by YaHuWaH Elohim to be observed forever by His people. We should look for globally newsworthy events that happen on YaHuWaH's appointed days, such as His appointed Sabbaths and Feasts.


Many bible researchers associate the Day of Trumpets with the return of Israel's Messiah to earth and the resurrection of the dead at the blast of the trumpet. Note also that the name "Brazil" is associated with the Hebrew word "Barzel" meaning "iron". We're told that Messiah will rule with a rod of iron.


Iron is the condition of many types of burned out stars. Stars like our sun go through a process of burning their hydrogen, helium, etc., until finally our sun will turn into a lump of iron as it processes and burns heavier and heavier elements and then stops burning. Our sun will eventually become a dark and dead star, a huge ball of iron, not giving off any light or heat. It will be a dead star, a lump of barzel. OSIRIS REx (the god and king of the dead) approached the earth over Brazil (iron, which comprises a dead star).


Stars are significant of Angelic beings in the bible. OSIRIS REx, signifying the Egyptian king of the dead, approached the earth on the Day of Trumpets 2017 flying first over Brazil, with Brazil (Hebrew - Barzel, iron) signifying a dead angelic being, a dead "star".


Below is a graphic showing the path that OSIRIS REx took as it passed by the earth over Brazil beginning on 9/21/2017 at 8:20 PM EDT. Note that it was after sunset Jerusalem time on 9/21/2017 when the approach to earth by OSIRIS REx was made. The actual biblical approach timing was on the Karaite Day of Trumpets, 9/22/2017, not the Hillel calendar Day of Trumpets 9/21/2017. 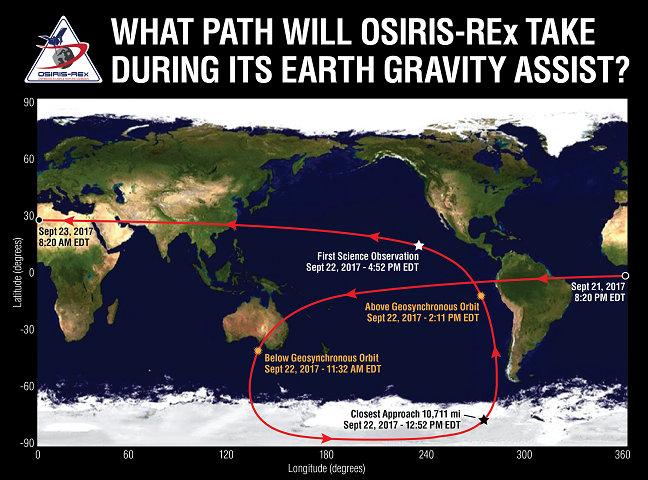 Above: Note that the OSIRIS REx spacecraft was flying at 19,000 MPH over Brazil after sunset on 9/21/2017. It appears to make loop on the graphic above because the earth is a sphere and the earth was turning beneath the spacecraft.


The time zones all meet together at the south pole, so on the graphic above the spacecraft appears to pass quickly through many time zones. It then crossed the International Date Line to add another day to the timing calculations.


As the spacecraft came closer to the earth, its velocity increased and it was then slingshoted away from the earth having gained an addition velocity of 8,451 MPH. The spacecraft was then flying at over 27,000 MPH.

Note in the graphic above that OSIRIS REx, signifying the Egyptian god of the Dead and a Latin king, passed over Egypt on 9/23/2017 at about 3:15 PM Jerusalem (and also Luxor, Egypt) time.

Above: The very rare sign of the Birth of the Manchild in the heavens from Revelation chapter 12 on 9/23/2017 while the spacecraft OSIRIS REx passed over the land of Egypt at over 27,000 MPH in perfect timely prophetic synchronization.


Revelation 12:1 And there appeared a great wonder in heaven; a woman clothed with the sun, and the moon under her feet, and upon her head a crown of twelve stars:
2 And she being with child cried, travailing in birth, and pained to be delivered.

The Significance of the Return Date


OSIRIS REx arrived at the asteroid Bennu on December 3, 2018.


Note that Yom Kippur, the Day of Atonement, denotes the day of the return of Israel's Messiah and the once per year biblical day of judgment scheduled by YaHuWaH Elohim.


So we have the sign of OSIRIS REx returning to earth after completing a 7 year and 16 day (2572 days) journey. The spacecraft is scheduled to return about 2 hours short (Jerusalem time) of the beginning special appointed Day of Atonement reserved by YaHuWaH Elohim for the return of Israel's Messiah. At least that's NASA's plan so far in 12/2018.


One of the reasons that 101955 Bennu was chosen as a target for the OSIRIS REx mission is that there's a 1 in 2,700 chance that the asteroid will impact the earth in 166 years.


The rare signs mentioned above concerning Revelation 12 and the OSIRIS REx mission appearing together in time are not an accident. And there are probably other relationships to be discovered here.


Repentance from sin and our determined alienation from the tempting social systems (social media, etc.) of this fallen world will help to assure our eternal survival. Abraham lived in tents away from the cities and social systems of his day (for the most part). That was to his wise advantage. Lot didn't. Remember Lot's wife (Luke 17:32).