One of the most significant events in the history of mankind was the development and implementation of the first atomic weapon.


The naming would turn out to be of prophetic significance.


The definition of the word "Trinity" is "the state of being three" or "threefold" or a "group of three".


Below is a graphic showing a curious relationship between the date of the Trinity Test and the birth date of President Donald J. Trump.


YaHuWaH Elohim used the above initial revelation of information to spur further investigation into the Trinity Test event.

Below: The Trinity Test shares a timely relationship with the birth of Donald J. Trump and the founding of the modern nation of Israel.

Above: Israel declared its independance on 5/14/1948 and was immediately attacked by its Arab neighbors. The war for independance ended on 3/10/1949 and the hand made Ink Flag was raised in Eilat by the Israeli Army. All of the numbers in the graphic above have biblical meanings.

The Trinity Test and the Tav on the Ghoul's Forehead


On 4/11/1996 comet Hyakutake crossed through the constellation of Perseus and across the symbolic severed forehead of a Ghoul. The constellation Perseus signifies Israel's Messiah, the Breaker (Micah 2:13). The definition of a ghoul is a monster that devours children (signifying child sacrifice and the modern abortion process).


On 4/11/1997, a year later, comet Hale-Bopp passed through Perseus, placing an "X", paleo Hebrew Tav or "end mark", on the ghoul's forehead as shown in the graphic below. It caused a stir among astronomers at the time because both comets were bright and easily visible with the unaided eye. Note that information concerning this event now appears to be disappearing from the internet. 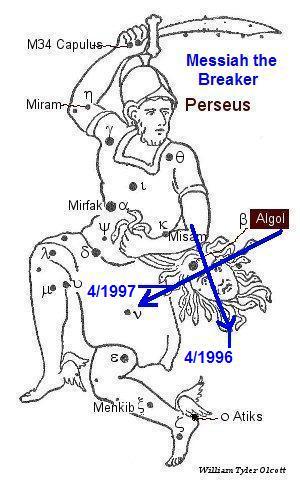 Above: Messiah and the severed Ghoul's head with snakes for hair.


Below: The timely biblical date relationship between the Trinity Test and the Tav "X" being placed on the Ghoul's forehead.


Trinitite, the Prophetic Pale Green "Horse" of the Trinity Test


Revelation 6:8 And I looked, and behold a pale (Greek - chloros - pale green) horse: and his name that sat on him was Death, and Hell followed with him. And power was given unto them over the fourth part of the earth, to kill with sword, and with hunger, and with death, and with the beasts of the earth.


The examination of the site after the Trinity Test revealed that sand nearby had been fused into a pale green glassy stone by the test. The green stone wasn't just any type of regular molten glass. This stone was slightly radioactive. 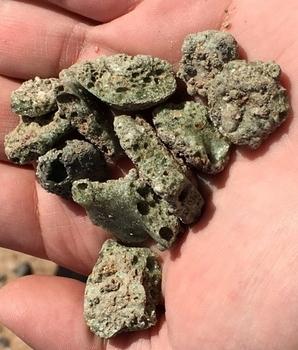 
Note that the nuclear test had been named "Trinity" previously by J. Robert Oppenheimer.


Results of gamma spectroscopy testing of the pale green stony material revealed that a group of 3 radioactive chemicals were found in the composition of the now solidified molten residue. The radiation of the atomic explosion itself had produced those three radioactive chemicals in the glassy sand. The pale green stone was subsequently named "Trinitite". The Trinity Test was the result of the Manhattan Project.

The Cryptic Message Embedded in Trinitite by YaHuWaH Elohim


The names of the radioactive chemicals Americium and Europium in Trinitite immediately catch our attention, reminding us of America and Europe. All three chemicals deserve further investigation.


Below: The element Cesium was discovered in 1860. Cesium was named for the latin word meaning "sky blue". The radioactive isotope Cesium 137 is found in Trinitite. An accompanying Tav is indicated. 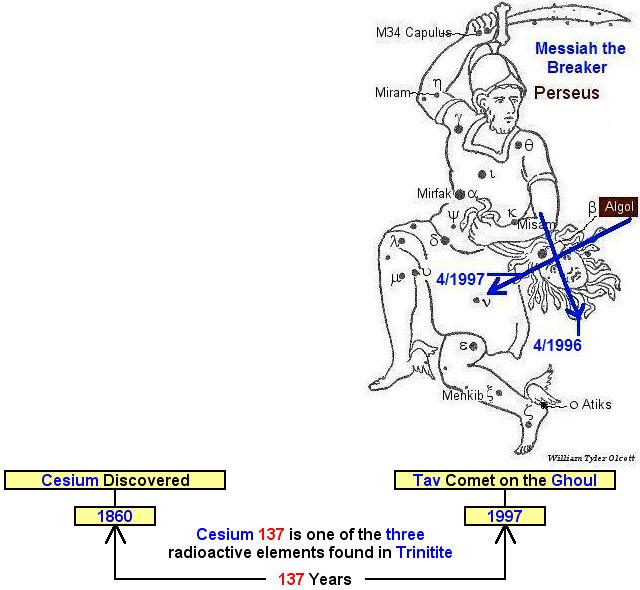 Below: The radioactive isotope Americium 241 is found in Trinitite. Americium was named for the Americas. An accompanying Tav is indicated. 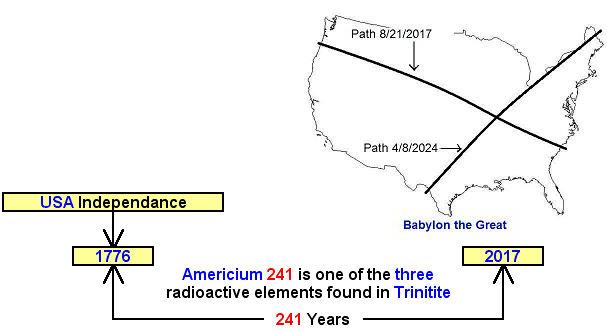 Below: The radioactive element Europium 152 is found in Trinitite. Europium was named for Europe. Israel's 100th anniversary as a modern sovereign nation, and an accompanying Tav are indicated. 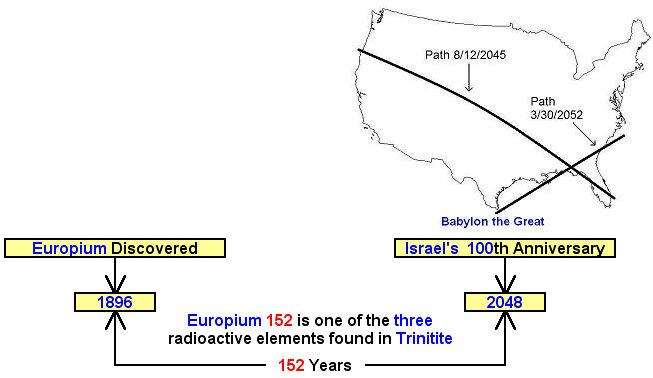 Below: A combination of dates relating to President Donald Trump and Americium 241 and the solar eclipse Tav currently being placed upon the United States by our Creator, YaHuWaH Elohim. 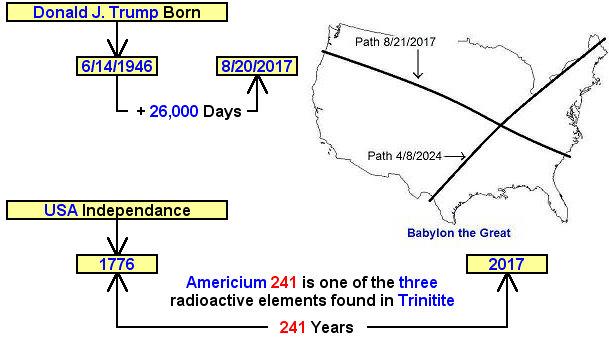 Above: The signature of YaHuWaH Elohim, Creator of Worlds. The numerical value of YHWH in the Hebrew aleph-bet is 26.


Revelation 6:8 And I looked, and behold a pale (Greek - chloros - pale green) horse: and his name that sat on him was Death, and Hell followed with him. And power was given unto them over the fourth part of the earth, to kill with sword, and with hunger, and with death, and with the beasts of the earth.

May YaHuWaH Elohim have mercy on us all.

It's All About The Walls