The Trinity Test and the Political Trinity

The previous article of 4/4/2019 titled "Trinity and the Pale Horse of Revelation" explored a unique association between the first test of an atomic weapon, the Trinity Test, and the birth of President Donald Trump 333 days later.


It happens that the word "trinity" means a "group of three", and there was a group of three "3's", 333 days, between the first atomic weapon test and the birth of Donald Trump. 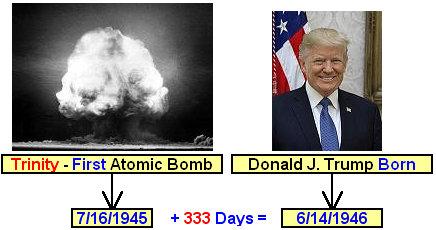 
We will recognize President Donald Trump as being the first member of a "political trinity", a group of three politicians, each one having unique timley relationship with the Trinity Test of 7/16/1945.


The second member of this special " Political Trinity" is President Bill Clinton. 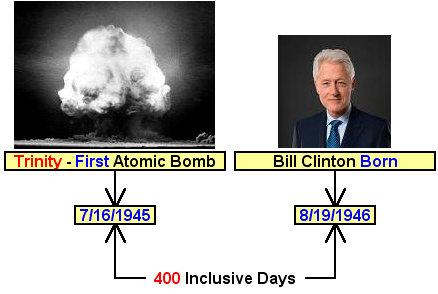 Above: YaHuWaH Elohim has marked President Bill Clinton with a paleo Hebrew "Tav" (the Tav has a numerical value of 400) in relationship with the Trinity Test, ordaining Bill Clinton's birth to be exactly 400 inclusive days after 7/16/1945.


Is there a link between atomic weapons, Bill Clinton, and the end of modern Babylon? There has been recent mention in the news media that Bill Clinton and his wife were involved in a business transaction involving the sale of about 20% of United States uranium to Russia in exchange for millions of dollars being donated to their "charity" by foreign entities.


The third member of the "Political Trinity" having a timely relationship with the atomic Trinty Test of 7/16/1945 is U.S. Congressman Al Green. 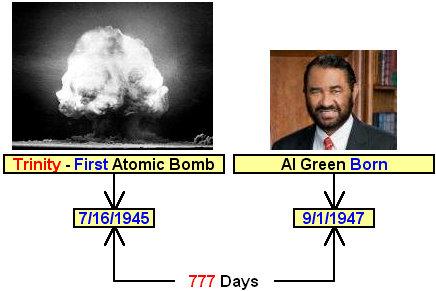 Above: YaHuWaH Elohim ordained that Congressman Al Green be born a biblical 777 days after the first atomic weapon test.


YaHuWaH Elohim provides extraordinary signs to my wife and I from time to time.


On Presidential Election Day, 11/8/2016, my wife and I were on the front deck as a USAF A-10 jet flew just above the treetops of our property. We had seen the jets around nearby before once in a while, but this one was the closest by far, roaring past our house about 50 feet above the 60 foot tall trees in our front yard. The unexpected experience was so out of the ordinary that it caused Connie to begin to cry. There was a message in the event to us from YaHuWaH Elohim. 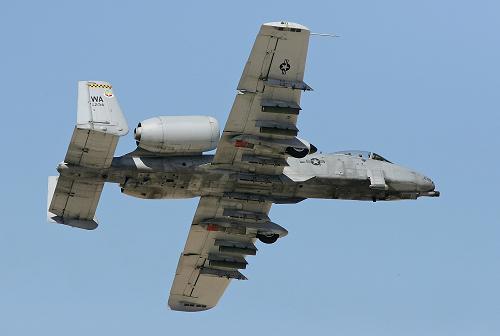 Not only was the close flyby exciting and special, but the day was also 11/8/2016, the day that Donald Trump was elected President of the United States.


In the early morning hours before dawn on 12/5/2017 a windstorm blew through northern Michigan. Later that morning it was found that the wind had taken the top off a very large tree that was just off the northeastern corner of our property. The wind had also taken the top off of a smaller tree nearby, but beyond that none of the hundreds of other tall trees in the neighborhood had been damaged. 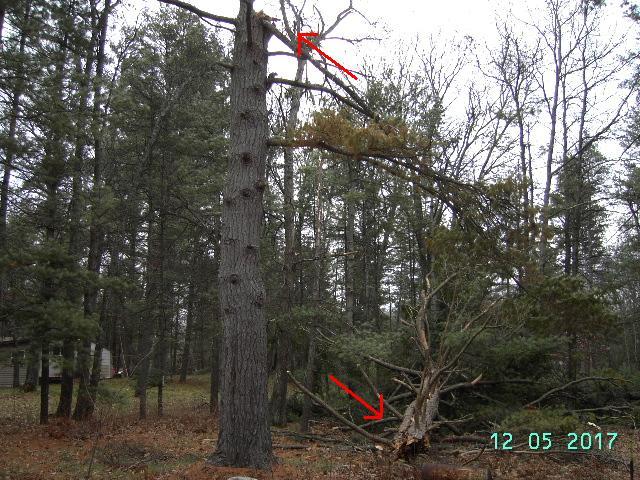 Above: The red arrows show where the top section of the large tree was blown off during the windstorm of 12/5/2017.


I have often inquired of YaHuWaH Elohim concerning the toppling of the tree top, because it was such a rare event, but received no guidance as to what it might mean until now. The next day, 12/6/2017, President Trump made his now famous Jerusalem announcement, recognizing Jerusalem as the capital of Israel.


Be aware that Daniel chapter 4 concerns the account of the King of ancient Babylon being depicted as a mighty tree that was cut down to a stump. The King of Babylon then became as a beast for seven years, at the direction of the angelic watchers who passed judgment on the arrogant King. This prophetic chapter is ignored by most prophecy teachers today.


It happens that also on 12/5/2017, when the tree top mentioned above fell, Congressman Al Green authored an inpeachment letter to Congress concerning the impeachment of President Trump.


It also happens that Congressman Al Green entered an impeachment resolution against President Trump in the House of Representatives on 12/6/2017, the very same day that President Donald Trump recognized Jerusalem as Israel's capital city.

The "Political Trinity" in Relationship with the Trinity Test

Above: The two Presidents and a Congressman form a "Political Trinity", a political group of three. The births of the three political figures are related in timely fashion by YaHuWaH Elohim with the Trinity Test of 7/16/1945.


We give praise to YaHuWaH Elohim for assuring us that He's in complete control of the events that seem to be spiraling out of control around us today, as evidenced by the information above.