On 8/21/2017 a total solar eclipse crossed the United States from coast to coast. The graphic below shows the path of the eclipse. Those people who positioned themselves on the central line on the map saw the longest duration of the eclipse. 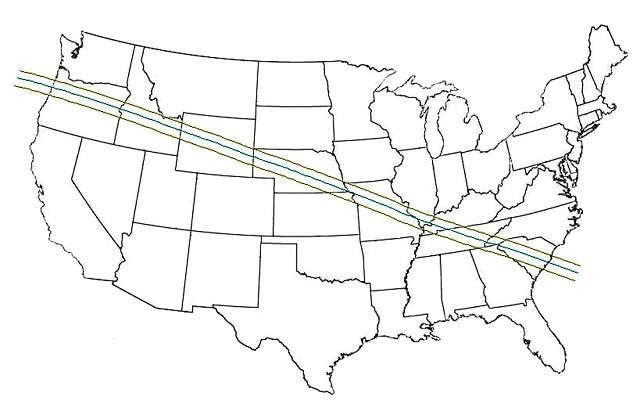 
The 8/21/2017 solar eclipse exerted maximum tidal forces on the magma under the earth as the shadow of the moon passed south of Yellowstone caldera and then directly over the New Madrid Fault at the Mississippi river. 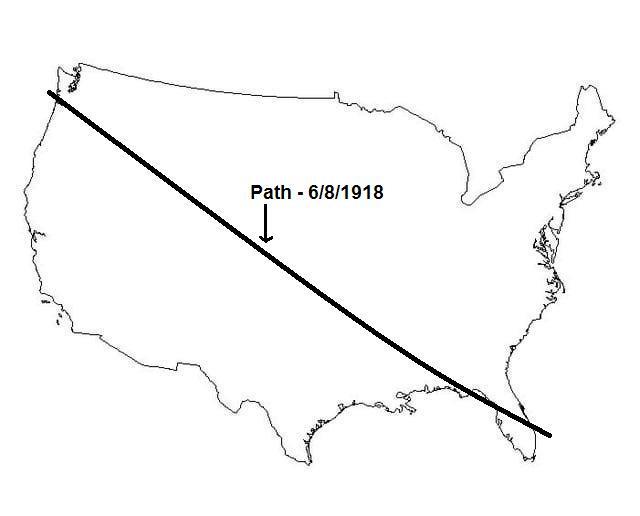 Because of a couple of factors, the total solar eclipse of 6/8/1918 deserves our closer attention.

Below is a graphic illustrating the timing relationship between the USA solar eclipse of 6/8/1918 and Jerusalem.

The solar eclipse of 6/8/1918 crossing the USA links the United States with Jerusalem via the timeline as shown in the graphic above.


The total solar eclipse of 8/21/2017 is a special eclipse that has a partner eclipse that will occur 2422 days later on 4/8/2024. That solar eclipse in 2024 will mark the precise astronomical beginning of the Hebrew year, Aviv 1. These two solar eclipses will place an "X" on the United States and indicated in the graphic below. 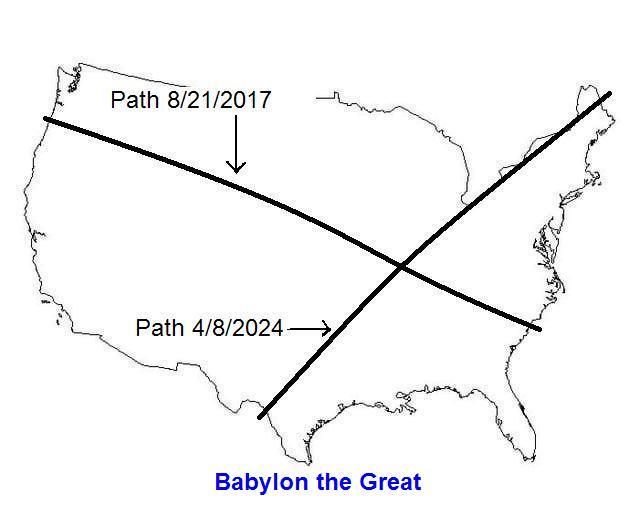 The point of intersection of the two solar eclipses is about 10 miles SSW of Carbondale, IL, on the New Madrid Fault zone which is prone to earthquakes . The Carbondale region in southern Illinois has large coal deposits and is known locally as "Little Egypt".


The ancient Paleo Hebrew "Tav", end mark, painted on the USA by the solar eclipses as indicated in the graphic above is treated, along with other Tavs, on this page: Link https://www.joybysurprise.com/the-four-tavs.html

Jerusalem, the USA Tav, and the Handwriting on the Wall


The cryptic Handwriting on the Wall event in ancient Babylon on October 11, 539 BC told of the demise of Babylon that very night. Encoded into that cryptic writing, Mene Mene Tekel Upharsin, was the value of 126 shekels. The 126 shekels reduced down to 2520 gerahs, at 20 gerahs per shekel via this means, mina = 50 shekels, mina = 50 shekels, tekel = 1 shekel, and upharsin = 1/2 mina = 25 shekels. Daniel was the chief of the astrologers of Babylon and the only person anointed of YaHuWaH Elohim to reveal the message to the King. Our heavenly Father is a revealer of secrets.


The graphic below illustrates a 2520 day relationship between the nation of Israel and the Tav on the United States indicating the end of modern Babylon.

A 2520 day relationship, extracted from the value encoded into the Handwriting on the Wall, is revealed between modern Israel's 70th year of statehood and the end, the demise, of modern Babylon the Great in the graphic above. Our beloved Creator Elohim Himself has again written the demise of Babylon with His own hand, inscribing it on the face of the earth using the moon's shadow.


Because prophecy can be cyclic and repetitive, the end of Babylon's power over Israel and the nations after 70 years is revealed toward the end in the prophecy of Jeremiah below.


Jeremiah 25:8 Therefore thus saith YaHuWaH of hosts; Because ye have not heard My words,
9 Behold, I will send and take all the families of the north, saith YaHuWaH , and Nebuchadrezzar the king of Babylon, My servant, and will bring them against this land, and against the inhabitants thereof, and against all these nations round about, and will utterly destroy them, and make them an astonishment, and an hissing, and perpetual desolations.
10 Moreover I will take from them the voice of mirth, and the voice of gladness, the voice of the bridegroom, and the voice of the bride, the sound of the millstones, and the light of the candle.
11 And this whole land shall be a desolation, and an astonishment; and these nations shall serve the king of Babylon seventy years.
12 And it shall come to pass, when seventy years are accomplished, that I will punish the king of Babylon, and that nation, saith YaHuWaH , for their iniquity, and the land of the Chaldeans, and will make it perpetual desolations.
13 And I will bring upon that land all My words which I have pronounced against it, even all that is written in this book, which Jeremiah hath prophesied against all the nations.
14 For many nations and great kings shall serve themselves of them also: and I will recompense them according to their deeds, and according to the works of their own hands.


Planned Parenthood Federation of America has an International outreach division, Planned Parenthood International which has 149 member associations working in more than 189 countries. In 2014, total revenue was $1.3 billion, of which $528 million was given to it by the United States government. Babylon the Great is contributing to the whole earth being constantly defiled by the shedding of innocent blood through international abortions. This is just one of Babylon's sins that will bring the wrath of YaHuWaH Elohim upon the nation.

The Signature of YaHuWaH Elohim is Found in Both Eclipses


In the graphic above, YaHuWaH Elohim revealed to us a 2520 day relationship between the 70th year of Israel's statehood and the final eclipse of the USA Tav on 4/8/2024.


Below is a graphic that reveals a 2520 day relationship between the 80th anniversary of the Manhattan Project's 1st atomic test and the 1st eclipse of the USA Tav on 8/21/2017. 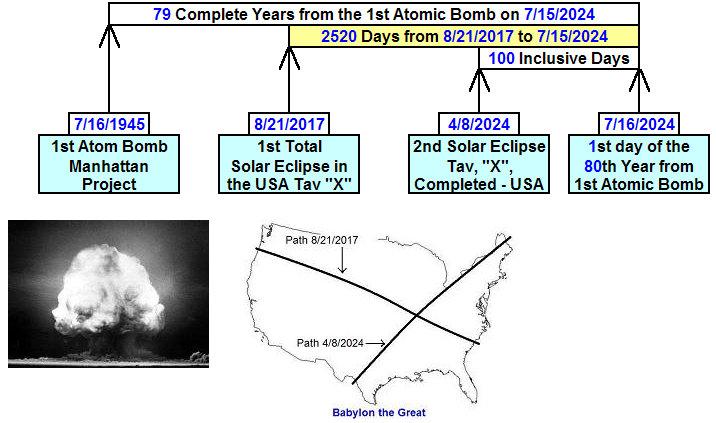 Through the information presented above, the eclipse of 4/8/2024 is revealed to have a 2520 day relationship with the modern State of Israel at its 70th anniversary date.


All of this information links the "X" placed on the United States with the 70th year of Israel, Jerusalem, the Handwriting on the Wall, and of course nuclear warfare.


On 5/13/1917, three children tending sheep near Fatima, Portugal, were visited by an angel appearing to be a woman. The angel told the children to return and she would appear to them on the 13th of each month, ending on 10/13/1917, and give them instructions.


The reason this is being mentioned is that the 100th anniversary of the beginning of the Fatima visions will be on 5/13/2017. The very next day, 5/14/2017, will begin Israel's 70th year as a modern nation. Thus, we see a timing link between the Fatima Visions and Israel's Statehood.


The Fatima Visions ended on October 13, 1917, with an event known as the Miracle of the Sun. About 70,000 people gathered to see what would happen on 10/13/1917. A miracle did happen. The three children were given messages by the woman in the vision. The third message was supposed to be released to the world years later around 1960, but it wasn't. Some people who asked what the third message contained were told "just read the book of Revelation and you'll know". The third Fatima message was supposedly released years later and was a very bland statement in comparison with the book of Revelation which contains pronouncements of deaths, wrath, and judgments upon the world.

The Miracle of Fatima and the Trinity Test


The Colors at Fatima


Here's a statement by one of the people in attendance at Fatima, Portugal, on 10/13/1917. “While looking at the sun, I noticed that everything around me darkened. Everything had the color of amethyst – the sky, the air, everything and everybody. A little oak nearby was casting a purple shadow on the ground. This did not give the impression of being an eclipse. While still looking at the sun, I noticed that the air had cleared. Everything far and near had changed now. Now everybody and everything looked yellow.

“The sun was sometimes surrounded by blood-red flames. At other times it was aureoled with yellow and soft purple.”

The Colors at Trinity

Here's an account of a witness to the first Atomic Trinity Test on 7/16/1945: “It turned yellow, then red, and then beautiful purple


The purple glow from an atomic fireball comes from ionized air being produced by the release of intense electromagnetic energy.

There's a noticeable agreement among the colors reported in the Miracle of the Sun at Fatima and the colors of the atomic fireball at the first nuclear test. That fact in itself may have been a part of the message being delivered by the miraculous woman of Fatima on 10/13/1917.

We know that just because something is a miraculous event doesn't mean that it's from our heavenly Father.


The real test of a false prophet is found in Deuteronomy 13:1-5. The test in Deuteronomy 13 says that even if there are miraculous happenings, healings, signs, and wonders, it doesn't automatically mean that the person doing the miracles and showing the signs is of YaHuWaH Elohim. If the person doing the healings and miracles isn't teaching people to follow YaHuWaH Elohim, then that person is a false prophet.


The Angel of Portugal and the UN

October 13, 2016 was the 99th anniversary of the Miracle of the Sun in Fatima, Portugal, on 10/13/1917. October 13,2016 was also the 1st day of the 100th year since the Miracle of the Sun that at least warned us of atomic weapons via the colors involved in the miracle, even if the Roman Catholic Church probably didn't release the true contents of the third message delivered to the children on that day.

The end of 100th inclusive year from the end of the Fatima visions on 10/13/1917 will arrive on 10/12/2017. If we extend the Fatima visions a month further we would arrive at 11/13/2017, a date that has been treated extensively in previous articles as the beginning of some sort of flood.

Be aware that it was on 10/12/539 BC during the night (early morning) that the army of Cyrus entered ancient Babylon and took control. Be aware that 2,030 years to the day later on 10/12/1492 at about 2:00 AM that Christopher Columbus sighted the land that would later become Babylon the Great.

May YaHuWaH Elohim have mercy upon us all.