It's a biblical truth that YaHuWaH Elohim counts a thousand years as one day. This article will explore some historical thousand year time markers that are relevant to our current situation in the latter days.


Centuries ago, James Ussher researched the bible for information that would yield a date for the creation of the heavens and the earth. He arrived at the date of 4004 BC according to the times listed in the bible for the ages of the first humans, the reigns of kings, etc. That date is very recent according to scientific evidence for the millions of years of past earth history.


Be aware that the bible is a supernatural book, authored by a supernatural Being, and the dates and times listed in the bible are there for a specific reason. The reason that James Ussher arrived at 4004 BC for the date of Creation may be because that's a date YaHuWaH Elohim wants us to be mindful of. Time itself can easily be manipulated by YaHuWaH Elohim. 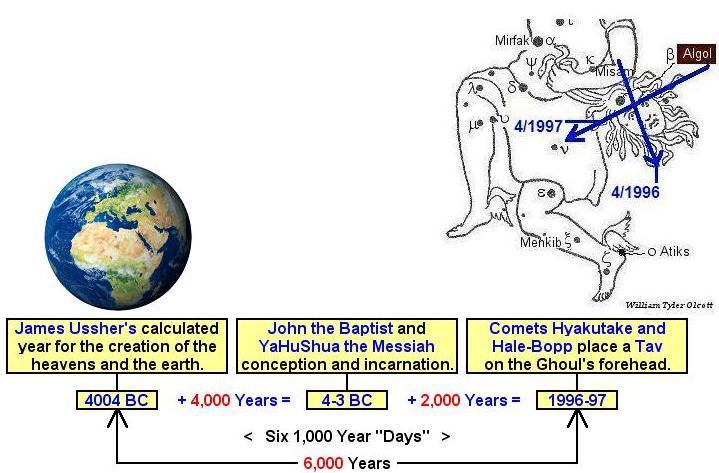 The seventh day is the specific day listed in the bible as being an appointed day for meeting with YaHuWaH Elohim and resting from our labors.


A total solar eclipse passed over Jerusalem on 8/20/993 AD. The eclipse occurred in the constellation of Leo, signifying Israel's Messiah the Lion of Judah. 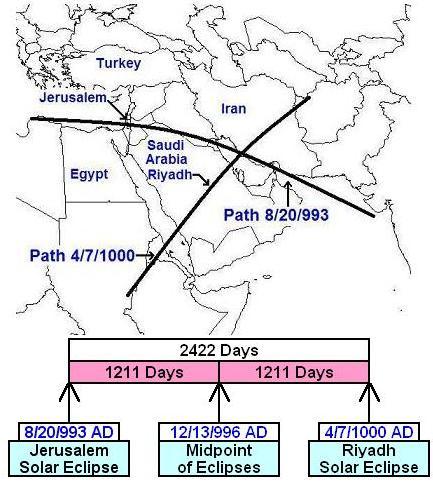 Above: The paleo Hebrew Tav passing over Jerusalem and Riyadh, being placed on Iran and the Middle East from 993 AD to 1000 AD by YaHuWaH Elohim. Note the midpoint date of the above Tav is 12/13/996 AD. 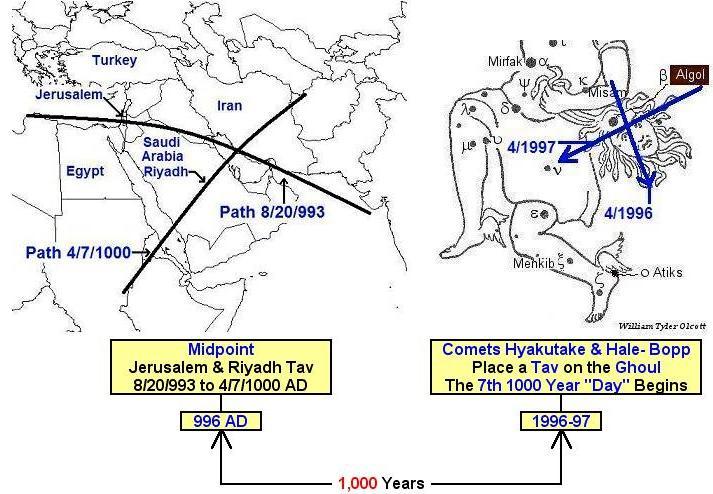 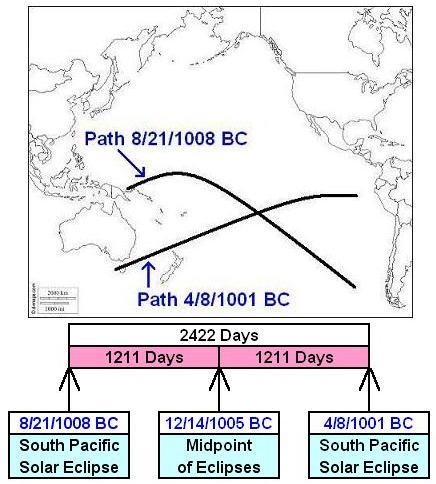 Above: A graphic showing a total solar eclipseTav placed on the South Pacific Ocean by YaHuWaH Elohim during the life of King David having a midpoint 0f 12/14/1005 BC.


Please be aware that the BC solar eclipse dates listed by NASA are one year off from most astronomy programs because NASA counts a "0", zero, BC year in their eclipse tables which does not exist in reality. The real year count goes from 1 BC to 1 AD. NASA's year count goes from 1BC to 0 BC to 1 AD, and can cause confusion if someone isn't aware of it. Zero BC does not exist. So the NASA eclipse dates BC in their tables are all one year off. Eclipses listed in UTC can be one day off from local eclipse times. These are technical considerations. 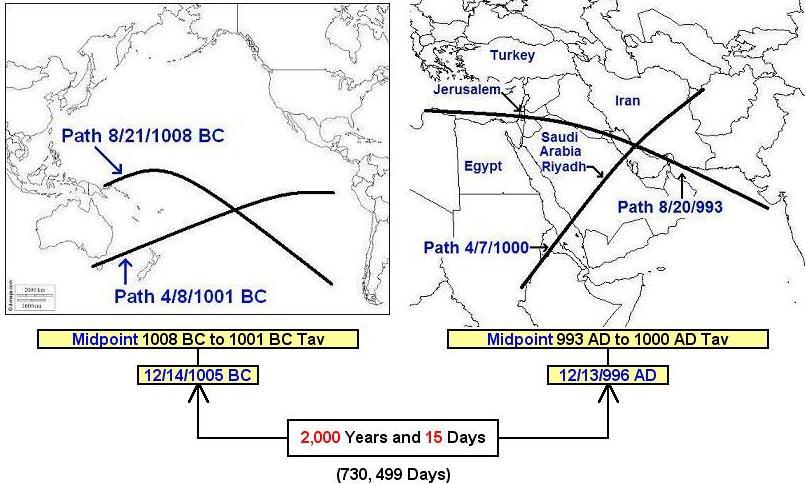 Above: Not shown in the graphic are the conception of John the Baptist and the incarnation of YaHuShua the Messiah around 4 BC midway between the Tavs above at the beginning of the 4th 1,000 year "day" from 4,004 BC.


An accurate BC to AD date calculator is available here: https://keisan.casio.com/exec/system/1247127342

The 3,000 Year Old "End Mark" and the Descent of the Heavenly Palace


The Day of Trumpets is a special day set apart and appointed by YaHuWaH Elohim Himself each year for His use and purposes.


Exactly 3 years to the day earlier, the New York stock market suffered a 777 points Dow Jones loss when it closed at 4 PM EDT on 9/29/2008, the eve of the Day of Trumpets. However, it was 11:00 PM in Jerusalem at the time the stock market in New York City closed, and the Hebrew Day of Trumpets had already begun at sunset in Israel.


Below: The beginning date of the total solar eclipse Tav, 8/21/1008 BC, during the time of King David has a curious timely and geographic positional relationship with the descent of the Tiangong-1 spacecraft on the Karaite Day of Passover, 4/1/2018. 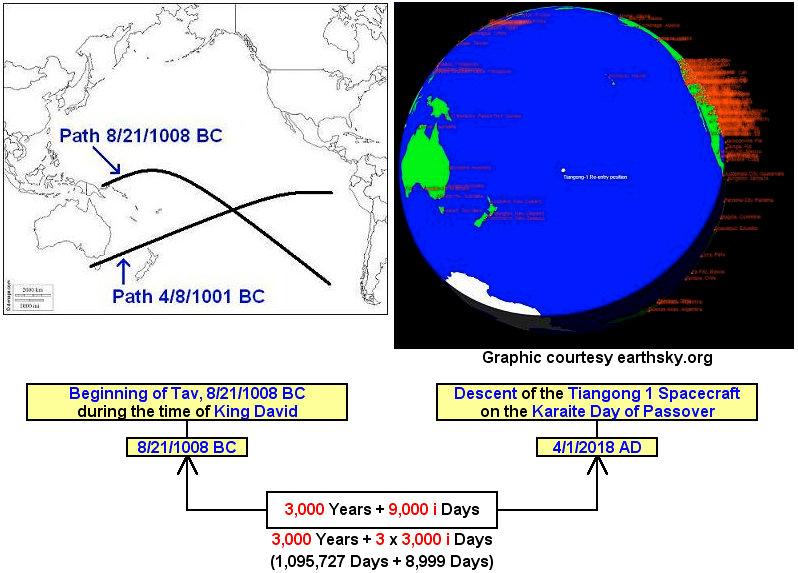 Above: The solar eclipse sequence from the time of King David marking the end of the 3rd 1,000 year "day" from 4,004 BC cryptically speaks to us concerning the coming descent of the New Jerusalem, YaHuWaH Elohim's "Heavenly Palace". We are also reminded that Israel's Messiah is known as the "Son of David" and the "Aleph and the Tav".


Revelation 21:9 And there came unto me one of the seven angels which had the seven vials full of the seven last plagues, and talked with me, saying, Come hither, I will shew thee the bride, the Lamb’s wife.
10 And he carried me away in the spirit to a great and high mountain, and shewed me that great city, the holy Jerusalem, descending out of heaven from YaHuWaH,

Above: The incarnation of YaHuShua the Messiah, identified as "the Aleph and the Tav", supplies history with a Tav End Mark around 4 BC to complement the orderly sequence of Tavs.


Whether we believe the heavens and the earth were created in 4,004 BC or not, it remains that the bible is coded in such a way so as to help confirm the information presented above.


The above information is fresh from heaven, and is revealed to us so that we might know that there is a Creator Elohim who is in complete control over the events in the heavens and on the Earth. He desires a personal relationship with each of us.