Revelation 12:1 And there appeared a great wonder in heaven; a woman clothed with the sun, and the moon under her feet, and upon her head a crown of twelve stars:


2 And she being with child cried, travailing in birth, and pained to be delivered.


The Instruction to Watch for Signs in the Heavens

YAHUSHUA the Messiah told His people to "lift up their heads" when they saw signs in the sun, moon and stars, with distress of nations, perplexity, and unusual bad weather.


Luke 21:25 And there shall be signs in the sun, and in the moon, and in the stars; and upon the earth distress of nations, with perplexity; the sea and the waves roaring;


26 Men's hearts failing them for fear, and for looking after those things which are coming on the earth: for the powers of heaven shall be shaken.
27 And then shall they see the Son of man coming in a cloud with power and great glory.
28 And when these things begin to come to pass, then look up, and lift up your heads; for your redemption draweth nigh.


The word meaning "lift up" in Hebrew is Strong's 05375 - Nasa. Speaking in Hebrew, YAHUSHUA told His disciples and us to "Nasa" our heads at the end of the age.


David chose 5 smooth stones when he went to face Goliath. Perhaps because Goliath had 4 brothers. I had noticed that Comet Holmes had crossed AlGol on 1/22/2008 and had a 2514 day period. That's just 6 days short of 2520 days.

Above: Comet Holmes crossing the star AlGol (Symbolic of Satan's forehead) on 1/22/2008.


YaHuWaH Elohim said that He would shorten the days in the tribulation period for the sake of the Elect. So I went looking for comets. I immediately found four comets that have periods as follows:


I began to investigate Tempel 1 because it's name is pronounced "Temple". Here's the scoop:


Tempel 1 was discovered in 1867 by Wilhelm Tempel, 100 years before Israel took Jerusalem. The comet was lost and unable to be found after 1879. In 1968 astronomer Elizabeth Roemer was looking through old photographic plates and found Tempel 1 again on a photo that had been taken previously on 6/8/1967, one day after Israel took Jerusalem.


NASA launched a mission on 1/12/2005 to fly to comet Tempel 1 and have an 820 lb. projectile blast into it's surface to investigate the results. The mission was called "Deep Impact" and the comet was impacted by the probe on 7/4/2005. 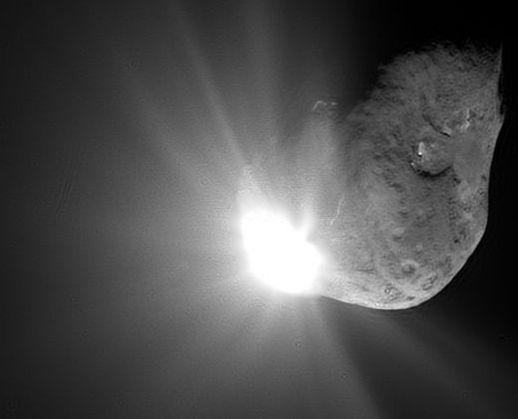 
Above: The impact caused so much dust that NASA had to send another mission named NExT (New Exploration of Tempel 1) to take pictures. That mission was approved on 7/3/2007 and NASA used the existing Stardust spacecraft to do a flyby.


The thing about this "Deep Impact" event that caught my eye was that it occurred in the constellation Virgo.


Below: An image of Tempel 1's location as it appeared to fly through Virgo in 2005: 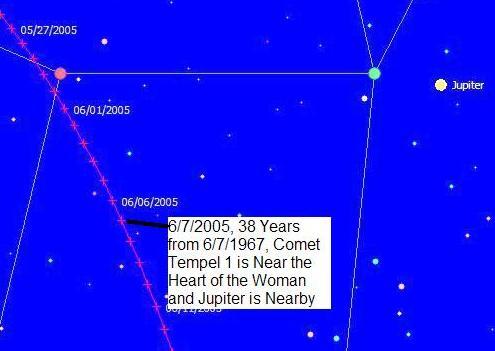 Below: An image of the "Sun Clothed Woman" sign on 9/23/2017 with the path of Tempel 1 in 2005 superimposed on it below. The yellow spot in the "womb" of the woman is the planet Jupiter, a sign of the manchild who is about to be born.

Below: An extreme closeup of the sun clothed woman on 9/23/2017 with the Tempel 1 2005 path superimposed on the image below. Jupiter and it's moons are in the "womb" of the woman. 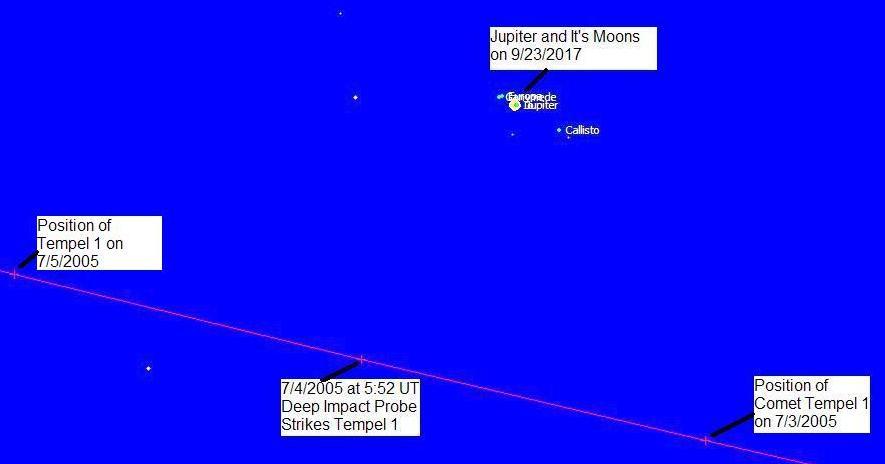 Comet Tempel 1 was impacted by NASA's "Deep Impact" 820 lb. probe on 7/4/2005 at the location in Virgo shown above. The image above is an extreme closeup of the sun clothed woman on 9/23/2017 with the Tempel 1' path superimposed and Jupiter very close nearby. The impact by the probe takes place in the "womb" of the "Sun Clothed Woman" very close to where Jupiter is located at the time of the sign of 9/23/2017 as pictured above.


John 2:18 Then answered the Jews and said unto Him, What sign shewest thou unto us, seeing that Thou doest these things?
19 YAHUSHUA answered and said unto them, Destroy this temple, and in three days I will raise it up.
20 Then said the Jews, Forty and six years was this temple in building, and wilt Thou rear it up in three days?
21 But He spake of the Temple of His body.


YAHUSHUA the Messiah was "Temple One", His taught ones would also become "temples" after His death and resurrection.


Acts 2:1 And when the Feast of Harvest was fully come, they were all with one accord in one place.
2 And suddenly there came a sound from heaven as of a rushing mighty wind, and it filled all the house where they were sitting.
3 And there appeared unto them cloven tongues like as of fire, and it sat upon each of them.
4 And they were all filled with the Set Apart Spirit, and began to speak with other tongues, as the Spirit gave them utterance.


Revelation 12:1 And there appeared a great wonder in heaven; a woman clothed with the sun, and the moon under her feet, and upon her head a crown of twelve stars:


2 And she being with child cried, travailing in birth, and pained to be delivered...

Revelation 12:5 And she brought forth a man child, who was to rule all nations with a rod of iron: and her child was caught up unto YaHuWaH, and to His throne.

Linking comet Tempel 1 to Jerusalem and the Temple Mount:


I think the NASA "Deep Impact" mission was ordained by the Creator, and that it helps to confirm that the sign of the "Sun Clothed Woman" of Revelation 12:1-2 that appears in the sky on 9/23/2017 might be valid.

The Birth of the Manchild Company

Here's a link to some info concerning the Manchild company: http://www.sigler.org/shofar/janeleade/grchpt4.htm


As an example of circumcising and naming, both Abram and Sarai received new names, Abraham and Sarah, from our heavenly Father at the time of Abraham's circumcision, the first circumcision.


Luke 2:21 And when eight days were accomplished for the circumcising of the child, His Name was called YAHUSHUA, which was so named of the angel before He was conceived in the womb.

Leviticus 12:1 And YaHuWaH spake unto Moshe, saying,
2 Speak unto the children of Israel, saying, If a woman have conceived seed, and born a man child: then she shall be unclean seven days; according to the days of the separation for her infirmity shall she be unclean.
3 And in the eighth day the flesh of his foreskin shall be circumcised.
4 And she shall then continue in the blood of her purifying three and thirty days; she shall touch no hallowed thing, nor come into the sanctuary, until the days of her purifying be fulfilled.


The Manchild is Taken to the Temple (The Rapture?)

It appears that the Manchild company may be symbolically "brought to the birth" on or shortly after 9/23/2017 and then caught up to YaHuWaH's throne on or after the 40th day from birth.


Messiah ascended to heaven on the 40th day after His resurrection from the tomb (symbolic of birth from the womb).


Revelation 12:5 And she brought forth a man child, who was to rule all nations with a rod of iron: and her child was caught up (Strongs 726 - snatched away, taken by force) unto YaHuWaH, and to His throne
6 And the woman fled into the wilderness, where she hath a place prepared of YaHuWaH, that they should feed her there a thousand two hundred and threescore days.

Luke 2:22 And when the days of her purification according to the law of Moshe were accomplished, they brought Him to Jerusalem, to present Him to YaHuWaH;

YAHUSHUA would have been taken to the temple in Jerusalem by His mother and father for dedication on or after the 40th day from His birth.

There is a section of scripture that tells of the recently born Messiah being whisked away to safety in Egypt by his parents just before the infants two years old and under were slaughtered at the command of Herod.

Matthew 2:1 Now when YAHUSHUA was born in Bethlehem of Judaea in the days of Herod the king, behold, there came wise men from the east to Jerusalem,
2 Saying, Where is He that is born King of the Jews? for we have seen His star in the east, and are come to worship Him.
3 When Herod the king had heard these things, he was troubled, and all Jerusalem with him.
4 And when he had gathered all the chief priests and scribes of the people together, he demanded of them where Messiah should be born.
5 And they said unto him, In Bethlehem of Judaea: for thus it is written by the prophet,
6 And thou Bethlehem, in the land of Juda, art not the least among the princes of Juda: for out of thee shall come a Governor, that shall rule My people Israel.
7 Then Herod, when he had privily called the wise men, inquired of them diligently what time the star appeared.
8 And he sent them to Bethlehem, and said, Go and search diligently for the young child; and when ye have found Him, bring me word again, that I may come and worship Him also.
9 When they had heard the king, they departed; and, lo, the star, which they saw in the east, went before them, till it came and stood over where the young child was.
10 When they saw the star, they rejoiced with exceeding great joy.
11 And when they were come into the house, they saw the young child with Mary his mother, and fell down, and worshiped him: and when they had opened their treasures, they presented unto him gifts; gold, and frankincense, and myrrh.
12 And being warned of YaHuWaH in a dream that they should not return to Herod, they departed into their own country another way.
13 And when they were departed, behold, the angel of YaHuWaH appeareth to Joseph in a dream, saying, Arise, and take the young child and his mother, and flee into Egypt, and be thou there until I bring thee word: for Herod will seek the young child to destroy him.
14 When he arose, he took the young child and his mother by night, and departed into Egypt:
15 And was there until the death of Herod: that it might be fulfilled which was spoken of YaHuWaH by the prophet, saying, Out of Egypt have I called My Son.
16 Then Herod, when he saw that he was mocked of the wise men, was exceeding wroth, and sent forth, and slew all the children that were in Bethlehem, and in all the coasts thereof, from two years old and under, according to the time which he had diligently inquired of the wise men.

Might there be something set in motion by the visit of Pope Francis with President Obama on 9/23/2015 that would result in the need for the man child to be taken to heaven two years later in 2017 to escape a commanded slaughter of innocent people?

Revelation 12:5 And she brought forth a man child, who was to rule all nations with a rod of iron: and her child was caught up (Strongs 726 - snatched away, taken by force) unto YaHuWaH , and to His throne.