In 2/1979 the Pahlavi government of Iran was overthrown by Islamist's who were hostile to the United States.


On 11/4/1979 a group of Iranian college students took over the U.S. Embassy in Tehran and held 52 American diplomats and citizens hostage for 444 inclusive days. The event was a major global news item.
Info link: https://en.wikipedia.org/wiki/Iran_hostage_crisis


This article will explore and bring to light some timely relationships between certain current politicians and that Islamic Hostage Crisis of 1979 as revealed to us by YaHuWaH Elohim.


We know that YaHuWaH Elohim ordains the births and deaths of those who inhabit His creation, and that He also works behind the scenes in the affairs of the nations. He reveals some of the relationships that He has placed among these various events so that we might glorify Him and know that He is in complete overall control of His creation.


The graphic below shows a timely realtionship between the birth of Barry Soetoro on 8/4/1961 and the beginning of the Iranian (Islamic) Hostage Crisis 6,666 days later on 11/4/1979.

We know that Barry Soetoro, a.k.a. President Barack Obama, planted Muslims in various offices of the government of the United States when he was in office. President Obama was also very generous monetarily in his dealings with the nation of Iran, a sworn mortal enemy of Israel and the United States of America, sending over a billion dollars in cash to the Islamic enemy nation.


Below: The timely relationship between the start of the Iranian Hostage Crisis on 11/4/1979 and the birth of recently elected congresswoman Ilhan Omar 700 days later on 10/4/1981.


The "Handwriting on the Wall" event was a message of doom (via a change in government) sent to ancient Babylon by YaHuWaH Elohim Himself. The government of ancient Babylon was quietly overthrown that very night of 10/11/539 BC by soldiers from ancient Persia (modern day Iran) who had secretly made their way underneath the city wall. Likewise, modern day Babylon, the United States of America, is experiencing a problem with enemies infiltrating via a defective border wall system.


Calculating U.S. congresswoman Ilhan Omar's conception date at 280 inclusive days before her birth date yields the following information in relationship with the start of the Iran Hostage Crisis of 1979.


The 422 days may be interpreted as two ancient Paleo Hebrew Tavs, silently speaking the words "end mark, end mark" to us as indicated below.

Below: Calculating U.S. congresswoman Ilhan Omar's conception date at 280 inclusive days before her birth date yields the following information in relationship with the end of the Iran Hostage Crisis of 1979.

Above: It was 22 days from the calculated conception date of Ilhan Omar to the end date of the Iran Hostage Crisis of 1979. 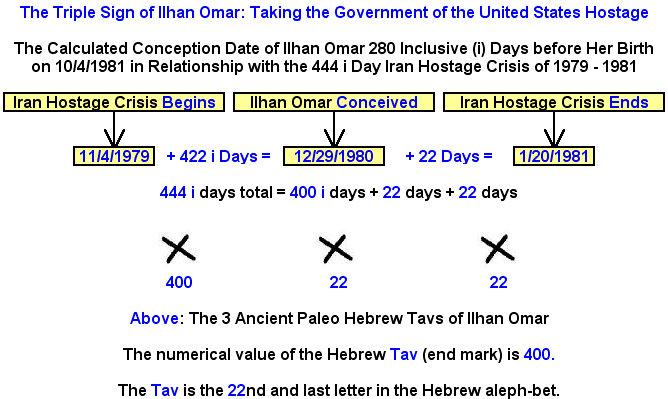 Above: The triple witness given to us by YaHuWaH Elohim should not be ignored.


Know that congresswoman Ilhan Omar has recently made anti-Semitic remarks. There were calls for her censure, but congress refused to name and reprimand her specifically, issuing instead a rather bland general statement. The politically correct congress of the United States of America is now (becoming) another hostage of Islam.


Revelation 20:4 And I saw thrones, and they sat upon them, and judgment was given unto them: and I saw the souls of them that were beheaded for the witness of YaHuShua, and for the word of YaHuWaH, and which had not worshipped the beast, neither his image, neither had received his mark upon their foreheads, or in their hands; and they lived and reigned with Messiah a thousand years.

Latest Articles
Abortion and the Ghoul that Eats Children

The Testing
It's All About The Walls
View on Mobile