Home Page
Riders of the Pale Horse of Revelation, Part 2

Revelation 6:8 And I looked, and behold a pale horse: and his name that sat on him was Death, and Hell followed with him. And power was given unto them over the fourth part of the earth, to kill with sword, and with hunger, and with death, and with the beasts of the earth.

The word translated in the King James bibles as "pale" in Revelation 6:8 above is the Greek word "chloros", meaning green or greenish yellow.


Other horses mentioned in the book of Revelation are called white, black, and red, colors that might be considered more normal for horses to display. But a green or greenish yellow horse is definitely "a horse of a different color". Note that the strange color is specifically chloros, not blue, purple, pink, yellow, maroon, burgundy, brown, or orange.


Chlorine is a chemical element, atomic number 17 in the Periodic Table of the Elements, always having 17 protons. The ancient Greeks regarded the elements as angels.


Chlorine is normally a pale yellow-green gas. It's used in water purification and bleach. The chemical compound sodium-chloride is common table salt.

Above: The chemical spectral lines of the element Chlorine, showing the brightest line in the green portion of the visible spectrum.


Chlorine was the first poison gas to be used in warfare, being introduced on the battlefield by Germany in 1915. It's cheap and easy to produce in large quantities. Chlorine produces hydrochloric acid in the lungs of those who breathe it, and breathing just a small amount can result in death.


Chlorine has been used as a weapon of mass destruction in Syria in recent years.


Al Gore Jr., politician and environmentalist, was the 45th Vice President of the United States. He is the founder and chairman of the Alliance for Climate Protection. He ran for President in the 2000 election with an emphasis on the environment.


The word chlorophyll, the chemical that makes grass look green, is derived from the Greek word chloros.


Mr. Gore's name means "triangular", which seems to be a bit unusual for the meaning of someone's name.


What does the number 17 and a triangle (Gore) have to do with chloros and mass deaths mentioned in the bible?

The word triangular (Gore), and the number 17 (Chlorine's atomic number), have a hidden relationship with Christianity and John chapter 21.


Below: The catch of 153 fish mentioned in John 21:11 symbolized by chloros colored balls arranged in equilateral triangular form. 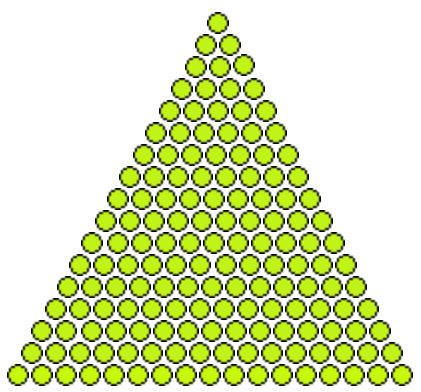 Above: The number 153 is mathematically known as the 17th triangular number. There are 17 chloros colored "fish" on each side of the above equilateral triangle containing a total of 153 "fish".

YaHuWaH Elohim Inscribes a Triangle on the Earth


The Total Solar Eclipse: A Symbol of Woe from our Creator Elohim


Below: A series of three total solar eclipses, marking the precise astronomical beginning of the Hebrew month of Av, inscribed a triangle on the earth that enclosed (set apart and sanctified) the earth's North Pole region. 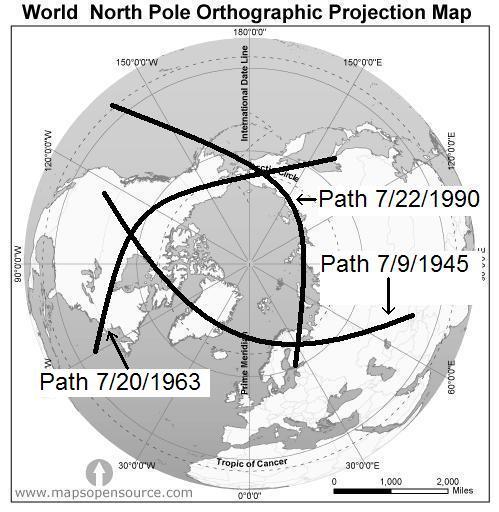 Above: According to Jewish Sages, total solar eclipses are a sign of woe to the nations. Note that the first eclipse of the above sequence of 1st Av eclipses was on 7/9/1945.


Exactly 7 days later on 7/16/1945 the very first atomic device, the Trinity Test, was detonated. The warning of woe had been given 7 days earlier by YaHuWaH Elohim.


Below: The 36th triangular number, 666, arranged in equilateral triangular form. There are 36 chloros balls on each side of the triangle below having a total of 666 balls. 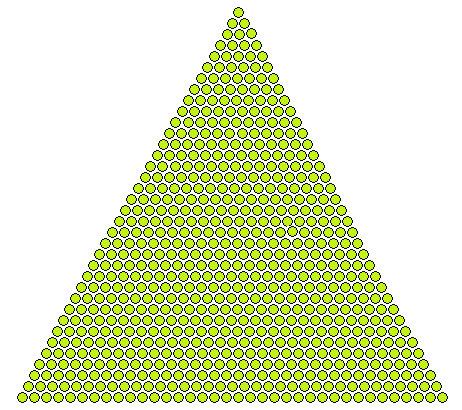 Above: 666 chloros colored balls arranged in an equilateral triangle having 36 balls to each side.


Know that NASA Jet Propulsion Laboratory (JPL) rocket scientist Jack Parsons and L. Ron Hubbard, founder of Scientology, were using occult magic rituals in 1946 to bring about the physical embodiment of the spirit of the Whore of Babylon.


Parsons mentioned that on October 31, 1948, he was contacted by a spirit having the name "Hilarion", the arcane Hillary. Hillary Rodham would have been 1 year and 5 days old at that time. 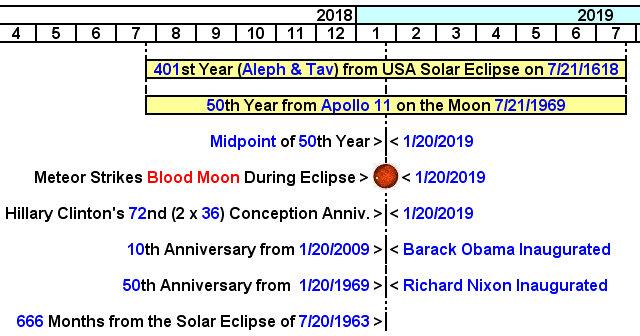 Above: Note that Hillary Clinton's 72nd (2 x 36 or 2 x triangular "666") calculated conception anniversary occurred 666 months after the total solar eclipse of 7/20/1963 that our Creator Elohim used to help form a triangle around the North Pole region displayed in the graphic further above.


More information concerning the date 1/20/2019 and items mentioned in the graphic above is available at this link: https://www.joybysurprise.com/six-hundred--threescore--and-six.html


Next: On 3/20/2015 the path of a total solar eclipse, indicated in blue below, occurred in the midst of four blood moon total lunar eclipses and intersects the triangle etched on the surface of the earth by YaHuWaH Elohim to set apart the region around the North Pole. 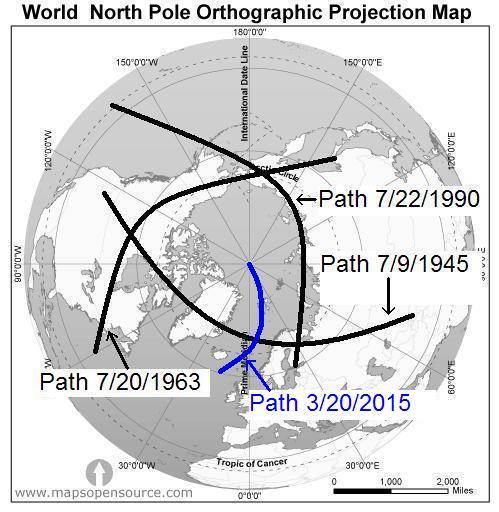 Below: The total solar eclipse of 3/20/2015 mentioned above occurred in the midst of four blood moon eclipses are on YaHuWaH Elohim's appointed Feast days of Passover and Sukkot (Tabernacles).

Below: At the very last second of totality at the very end of the total solar eclipse of 3/20/2015, the moon and sun just begin to touch the 153 degree meridian as viewed from the North Pole. The shadow of the moon then lifts from the surface of the earth upward into the sky from the precise location of the North Pole. 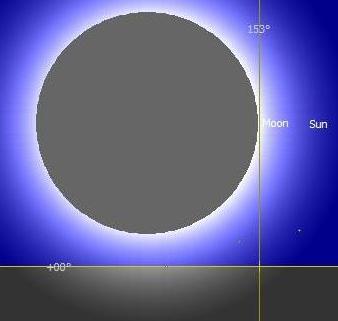 Above: The total solar eclipse of 3/20/2015 touches the 153rd meridian at the very end of totality as viewed from the North Pole.

The Triangular Relationship - Connecting the Dots


The number 153 at the North Pole solar eclipse in the central region of the triangle inscribed using the paths of solar eclipses around the North Pole by our Creator, YaHuWaH Elohim, leads us to the 17th triangular number, from there to Chlorine the 17th chemical element, and from there to the chloros horse of famine and death politically popularized by Al Gore (name Gore = triangular).


Congress woman Alexandria Ocasio-Cortez was born on the 72nd anniversary of the "Miracle of the Sun" event witnessed by about 70,000 persons in Fatima, Portugal, on 10/13/1917.


This congress woman is riding the chloros horse of the "Green New Deal" that was popularized by Al triangular Gore.


Note also in the grapics below that Ocasio-Cortez was elected to the U.S. House of Representatives on the 71st anniversary (also the 1st day of the 72nd year) from Al Gore's calculated conception date.

The numbers 36 and 72, relating to the ancient Babylonian magic square and the number 666, are now being revealed in the conceptions, births, and at prominent points in the lives of some of United States of America's politicians.


Not shown in the graphic above: Pale green horse rider Alexandria Ocasio-Cortez (Green New Deal) was elected to the U.S. House on 6/26/2018 during that final "one year day", the 2556th year from 539BC.


The first fall of ancient Babylon was a quiet government takeover on the night of 10/11/539 BC, but the city continued to exist for many years. However, the city of ancient Babylon is physically absent from the landscape today in southern Iraq. That means that it fell a second time and exists only as buried rubble and archaeological digs today.


Revelation 18:1 And after these things I saw another angel come down from heaven, having great power and the earth was lightened with his glory.
2 And he cried mightily with a strong voice, saying, Babylon the great is fallen, is fallen, and is become the habitation of devils, and the hold of every foul spirit, and a cage of every unclean and hateful bird. 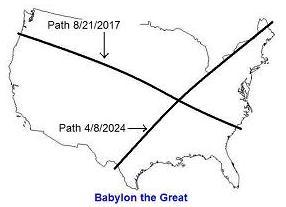 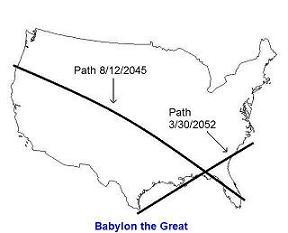 Above: Modern Babylon the great falls twice, indicated by the two ancient paleo Hebrew Tavs placed on the United States using the paths of total solar eclipses by our Creator, YaHuWaH Elohim.


The first fall of modern Babylon is now in progress as unclean spirits of violence and hate begin to inhabit the members of government and society, turning the nation into a perverted enemy of the Almighty Elohim and fit only for destruction (as it was in the days of Noah). Revelation 18:2 above.


The 72nd, 36 year period, from the fall of ancient Babylon on 10/11/539 BC began on 10/4/2018 and will terminate on 10/4/2054, in timely agreement with the solar eclipse Tavs placed on the United States and indicating the two "falls" of modern Babylon the great shown in the graphics above.

The above is not a prophecy, just a presentation of occurrences that appear to have a timely relationship with each other.

May YaHuWaH Elohim have mercy on us all.