A thought came to me the evening of 9/14/2020 concerning a total solar eclipse that will cross Chile and Argentina on 12/14/2020. I later woke up at 4:30am, and felt that I just had to get up and check out the idea on the computer. This article is the result of that morning's investigation.


A Covenant with Many


On 9/15/2020, President Trump helped to facilitate a peace treaty between Israel and the UAE. President Trump announced that many more countries might be willing to enter this peace process with Israel.


Many readers are already aware of the wording in Daniel 9:27, telling us of an anointed prince who will confirm a covenant with many. Most bible scholars attribute this passage as applying to Jesus Christ and the events surrounding His crucifixion.


However, there are instances in the bible where just parts of a verse were applicable at a given point in time, with the other parts reserved for future prophetic fulfillment. Please be very watchful at this current time. Things are happening around the world now that are definitely not normal.

The Solar Eclipse Over Chile and Argentina


On 12/14/2020, a total solar eclipse will cross the South American countries of Chile and Argentina. 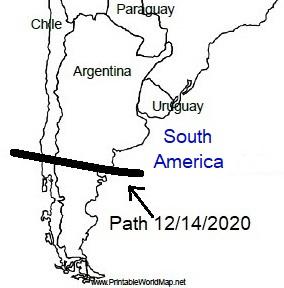 The thought came to me on 9/14/2020, exactly three months before the eclipse mentioned above, to check the point on the Chilean coast where the center track of the total solar eclipse would make landfall, and then see what the geographical coordinates of latitude and longitude would yield if applied to the northern hemisphere. I was surprised at the results.


Close examination via Google Earth and Google Maps found that the centerline of the solar eclipse of 12/14/2020, will make landfall in South America at 38 degrees, 56 minutes, 8 seconds south latitude and 73 degrees, 20 minutes, 44 seconds west longitude as indicated by the red line in the graphic below. 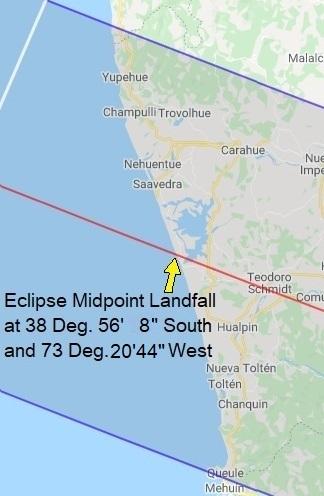 If we travel northward following longitude 73 degrees 20 minutes 44 seconds West, we will pass over several South American countries and eventually over the Atlantic Ocean about 75 miles east of the Outer Banks of North Carolina and finally arrive in the United States at the city of West Babylon, Long Island, NY, after passing over a barrier island.


West Babylon, NY, is directly and precisely due north of the point on the Chilean coast where the central line of the total solar eclipse of 12/14/2020 will make landfall. 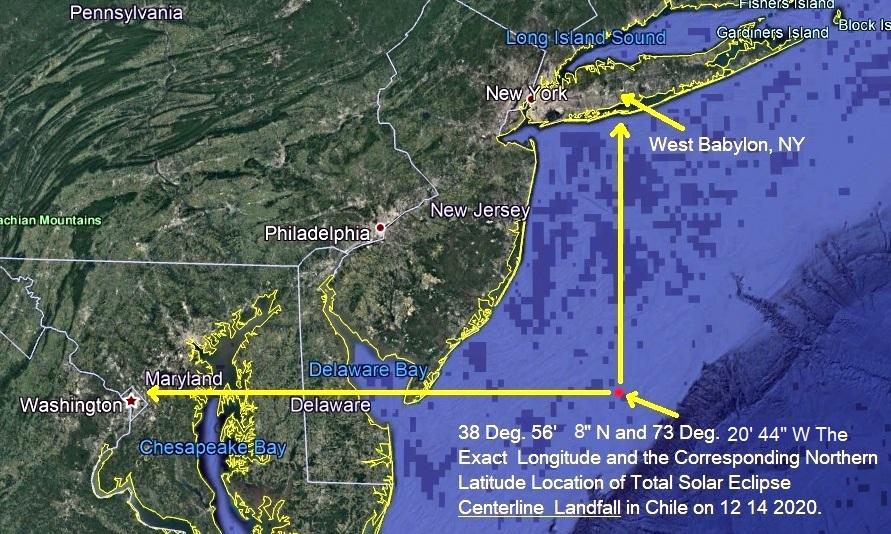 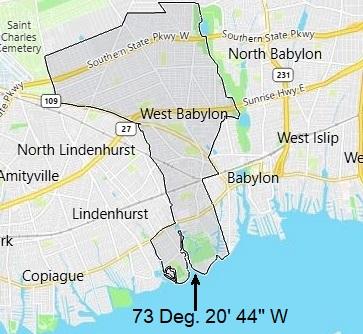 Above: West Babylon, Long Island, NY, is precisely thousands of miles due North of Solar Eclipse centerline landfall on the coast of Chile on 12/14/2020.


The town of Rome, Maryland became what is today known as "Washington, DC". Washington, DC, is situated across the borders of Virginia and Maryland.


The latitude of 38 degrees 56 minutes 8 seconds North passes through northern Washington, DC, directly through the Catholic University of America Physics Library, and then on westward through the traffic intersection of Wisconsin Ave NW and Idaho Ave NW. That intersection is about a mile north of Georgetown University https://uadmissions.georgetown.edu/ .


Quoted from the link above: "Georgetown University, with its tradition of Jesuit education, a location in Washington, DC, and a distinguished community of scholars from around the world, is a vibrant place to live and learn."


Jesuits are a militant faction of the Catholic Church. Pope Frances, the 266th Pope, is the very first Pope to be a Jesuit, a militant, from socialistic Argentina.


Being the 266th Pope identifies Pope Frances as the first Pope to be outside the "fish" symbol of Christianity.

Above: From ancient Greek mathematics, the dimensions of a fish are 153 x 265, with the ratio 265/153 being used to determine the square root of the number 3. In the bible John chapter 21 mentions 153 fish.


Bill Clinton, the untouchable, attended the Jesuit Georgetown University. Many of our past CIA directors and Presidential Advisors have been affiliated with Georgetown University and/or the Catholic Church. The Catholic Church is considered by some to be Mystery, Babylon the Great, the woman (considered by many to be symbolic of a church) that rides the Beast mentioned in the book of Revelation.


Revelation 17:4 And the woman was arrayed in purple and scarlet color, and decked with gold and precious stones and pearls, having a golden cup in her hand full of abominations and filthiness of her fornication:
5 And upon her forehead was a name written, MYSTERY, BABYLON THE GREAT, THE MOTHER OF HARLOTS AND ABOMINATIONS OF THE EARTH.
6 And I saw the woman drunken with the blood of the saints, and with the blood of the martyrs of Jesus: and when I saw her, I wondered with great admiration.


The total solar eclipse of 12/14/2020 in South America is the central chiastic theme being emphasized by our Creator Elohim concerning an "X" being placed upon the United States of America as shown in the graphic below.

In the information presented above, we see that our Creator YaHuWaH Elohim Himself identifies the United States as Mystery, Babylon the Great, by using His writing instruments, the Sun and Moon, to place marks upon the earth. 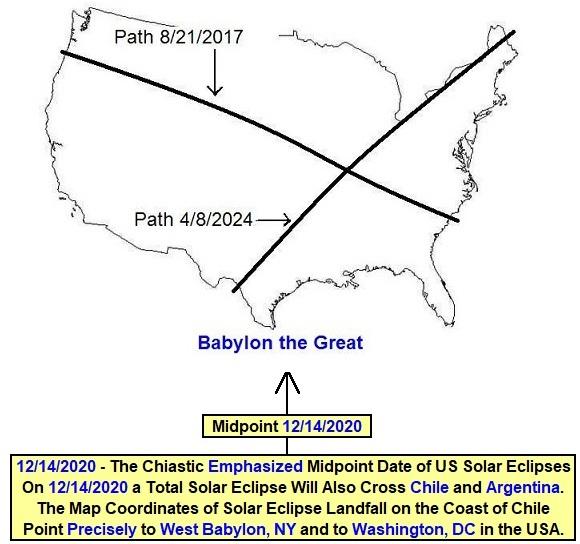 All credit for this information goes to YaHuWaH Elohim, who reveals secrets and information according to His will and His timing. Revelation is progressive. We can only know what we are allowed to know.


The people (and the angelic devils) of this world have a problem. For all their brilliance, there's something they don't know, and they haven't considered. One of these days their problem is going to show up. His Name is YaHuWaH Elohim. As Evangelist Norvel Hayes would say "All He has to do is show up".