As I set down to research and prepare the message below at 9:30 AM on 6/10/2017, there came immediately 3 separate double booms, probably from aircraft going supersonic far to the north. When unusual events like this happen, I wonder at what YaHuWaH Elohim will reveal in the course of the coming research. During the previous night, the thought had come to me to "research the 36". That was it. That was the only thought I had to go on.


Jeremiah 33:2 Thus saith YaHuWaH the maker thereof, YaHuWaH that formed it, to establish it; YaHuWaH is His Name;
3 Call unto Me, and I will answer thee, and shew thee great and mighty things, which thou knowest not.

On December 8, 2009, YaHuWaH Elohim revealed a message to me that He had written into the orbital mechanics of the earth-moon system. The next day a whirling light appeared in the sky seen from Norway. The day after that President Barack Obama received the Nobel Prize for Peace in Norway. This was the beginning of a time of progressive revelation concerning heavenly events that continues today.


If we today knew how to discern the heavens as the Magi of Parthia did 2,000 years ago, we'd be further ahead in our understanding of the times in which we live. Methods and systems of communications change, some becoming forgotten with time.


The invention of the telegraph in the 1840's ushered in the era of instant global communications. We should always pay attention to events that affect the entire world.


On 7/12/1999 the last commercial telegraph message from the United States of America was sent. The content of that final commercial message was again "What hath God wrought".


What indeed hath God wrought? Located today on the path of the very first telegraph message of 5/24/1844 between Washington, D.C., and Baltimore, Maryland, lies Fort Mead and the Central Intelligence Agency.


Although hobbyist Amateur Radio Operators continue to use the Morse International Telegraph Code, fewer than 10 Morse operators are now trained by the Air Force each year. The International Morse Code capable of delivering about 35 words per minute is being forgotten and dismissed as slow and irrelevant in the age of computer communications that is billions of times faster.

The Message from Our Creator Elohim


The message revealed to me on December 8, 2009, was a coherent array of lunar eclipses that popped into existence in 1910 after centuries of incoherent eclipse sequences. 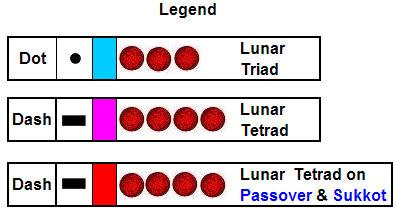 
The message below begins in the year 1617 AD and continue to 2336 AD in three different graphics.


The Hebrew alphabet has only 22 letters, so some Morse Code characters don't appear in Hebrew. Also, there are 2 "T" letters in Hebrew, the Tet and the Tav. Both "Tet" and "Tav" are represented by a single "dash" in morse code, the same as the English letter "T". However, the letters Tet and Tav carry different numeric values, the Tet = 9 and the Tav = 400.

Notice in the linear graphic above that sporadic "dots", lunar triads, were programmed into the earth-moon orbital system by our Creator Elohim from 1617 to 1881 AD.


In 1910 a Tav appears, an unbroken sequence of 4 lunar eclipses, a tetrad, after centuries without a tetrad. That Tav is the beginning of a preamble consisting of a Tav, Yud, Tav, Yud. The same sort of preamble is used in modern computer communications systems to allow the receiving entity to synchronize with the sender.


The morse code letter sequence L, L, L, is sent from 1945 to 1992. The Hebrew "L", lamed, has the ancient meaning of a shepherd staff being used to goad something, usually an animal such as a lamb, toward a destination.


In the year 2000 an unknown character begins to be sent. 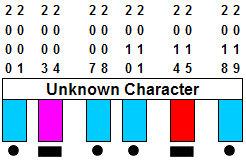 Above: The unknown character appears between the year 2000 and 2019.

Below: The midpoint of the 2014 to 2019 portion of the lunar sequence above. Note that the red block below identifies the special blood moon lunar tetrad that fell on Passover and Tabernacles in 2014 and 2015. 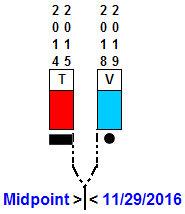 
Below: We separate the unknown character at the midpoint date found above. Note that the morse character from 2025 to 2037 is an "F" in International Morse Code, but the letter "F" isn't found in the Hebrew Morse Code chart. If we read the "F" backwards it becomes an "L", a Hebrew Lamed. 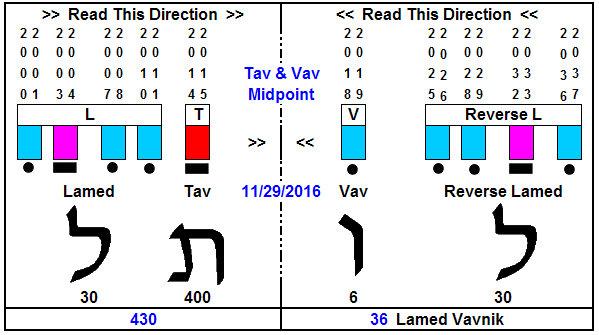 Above: By breaking the unknown character at 11/29/2016, we recognize a Lamed and Tav on one side and a Lamed and Vav on the other side. Those letters contain the numeric values listed in the graphic.


Exodus 12:40 Now the sojourning of the children of Israel, who dwelt in Egypt, was four hundred and thirty years.
41 And it came to pass at the end of the four hundred and thirty years, even the selfsame day it came to pass, that all the hosts of YaHuWaH went out from the land of Egypt.
42 It is a night to be much observed unto YaHuWaH for bringing them out from the land of Egypt: this is that night of YaHuWaH to be observed of all the children of Israel in their generations.


On the night before beginning this research, I was instructed by YaHuWaH Elohim to research the thirty six. I was expecting to research the 36 gods of ancient Babylon, but what I found was the 36 righteous people of medieval Judaism called the Lamed Vav or Lamed Vavnik. The Lamed Vav are supposedly 36 unidentified righteous people on the earth, who, if they were removed, the earth would be destroyed. This is where the research as taken me. The Lamed Vavnik can be easily found on the internet.


What the above graphic of the 430 and the 36 hints at is that of a "removing of the righteous". The children of Israel were removed from Egypt after 430 years. The reason for the Lamed Vav is that destruction will come if they are removed from the earth. Some would interpret this as a sort of "Rapture" type event.


Note that the 70th year from the dividing of the promised land by the United Nations expired on 11/29/2017.

Removal of the Blood Moon Tetrad


If we remove the blood moon tetrad from the unknown character mentioned above, we see a double Lamed Vav. 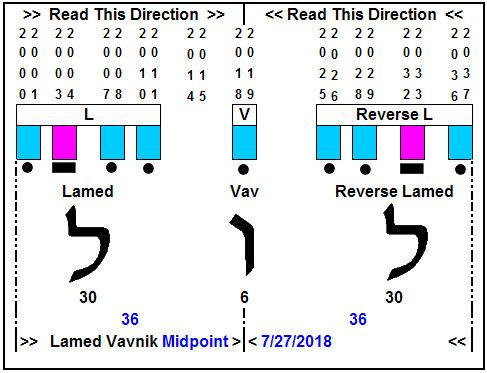 
The Removal of Righteous Lot from Sodom


Another witness to the removal of the righteous was found in the lunar eclipse sequence.


Lot and his family were removed from Sodom before its destruction. Lot's name in Hebrew is spelled "LVT" or Lamed Vav Tet. Hebrew is read from right to left, and if we read the lunar sequence from right to left we acquire the name "Lot", in Hebrew. Remember there are two "T's" in the Hebrew alphabet, both are symbolized by a single morse code "dash". 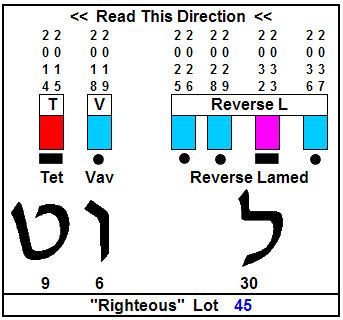 Above: The name "Lot" appears in the lunar eclipse sequence. This again hints at the removal of the righteous before the destruction of the wicked.


The above message is not something to be taken lightly. The message in the linear sequence far above ends with a sequence of 3 "Tavs" in the years 2119, 2137, and 2155. Hebrew "Tavs" are ancient "end marks", and it's the end of the coherent sequence issued by our Creator Elohim. The sequence then goes back to a series of Vavs for centuries.


This message comes from the extra-terrestrial Being who NASA, various governments, and the politically correct of the earth ignore. This message would certainly be explained away as "coincidence" by the unbeliever.


Coherence does not arise out of chaos without the intervention of an intelligent Being. That fact is the entire premise for the SETI program, looking for order in the electrical noise received from outer space.


President Donald Trump was born on 6/14/1946, precisely on the day of a lunar eclipse marking the exact center of a lunar triad that began the very 1st letter "L" in the 700+ year timeline far above.


Our current President has been severally marked by YaHuWaH Elohim. This is not something usual. It's out of the ordinary.