This article will be viewed by different types of people.


Because of our varied environmental backgrounds and learning, we all have different views and ideas concerning various topics and events.


But what if there is a string of rare events, one after another, that share a relationship with each other?


As each rare occurrence is added to the string, the mathematical probability of the entire string of events regarding continuing to be coherent and related with each other diminishes greatly.


What it all boils down to is that it would seem that there is an intelligent entity behind the scenes who has the ability to order the sequence of the coherent string of "coincident" events.


In the bible we're told of the Elohim, the intelligent entities who claim to have created the heavens, the earth, and all life on earth. The word Elohim is a plural Hebrew word. The bible tells us that one of the Elohim, YaHuWaH Elohim, is the most high El, higher in authority and abilities than the other Elohim and having limitless capabilities.


In this article, we will examine some current events and coincidences that appear to have a direct relationship with things mentioned in the bible from over 3,000 years ago.


First we have to establish a background scenario.


Judah, Symbolized as a Lion


The ancient tribe of Judah was associated with the symbol of a lion.


This association of the descendants of Judah with a lion arose from the prophecy that Jacob bestowed on his son Judah as Jacob neared death:


Genesis 49:9 Judah is a lion’s whelp: from the prey, my son, thou art gone up: he stooped down, he couched as a lion, and as an old lion; who shall rouse him up?


Jacob also prophesied over his eleven other sons at that time.


About 400 years after Jacob's prophecy on his twelve sons, the twelve tribes of Israel would depart Egypt under the direction and protection of a supernatural entity who identified Himself as YaHuWaH Elohim.


Numbers 2:1 YaHuWaH spake unto Moses and unto Aaron, saying,

2 Every man of the children of Israel shall pitch by his own standard, with the sign of their father’s house: far off about the tabernacle of the congregation shall they pitch.


Each of the tribes of ancient Israel had a different flag, a standard, that was associated with the type of prophecy that Jacob had given each of his individual sons centuries earlier.


Judah's standard was that of the figure of a lion on a blue background.


We have now established that the tribe of Judah was prophetically associated with the symbol of a lion from antiquity, over 3,000 years ago.

Israel's Messiah Symbolized by a Lion


Israel's Messiah was prophesied to come from Judah.


Micah 5:2 But thou, Bethlehem Ephratah, though thou be little among the thousands of Judah, yet out of thee shall He come forth unto Me that is to be Ruler in Israel; whose goings forth have been from of old, from everlasting.


The Hebrew Messiah has come to acquire the title "The Lion of the Tribe of Judah" because of the information related above.


The town of Bethlehem was located within the borders of the tribe of Judah in ancient Israel 2,000 years ago, at the time of the birth of Jesus Christ.


His birth in Bethlehem, Judah, would associate Jesus Christ with the symbol of a lion, and with the prophesied Ruler mentioned in Micah 5:2 above.

The Lion in the Sky

The heavens silently speak to us, and declare the glory of Elohim.


Psalms 19:1 The heavens declare the glory of Elohim; and the firmament sheweth His handywork.
2 Day unto day uttereth speech, and night unto night sheweth knowledge.
3 There is no speech, and there are no words.


Some of these groups of stars are mentioned in the book of Job, the oldest book in the bible.


Job 38:31 Canst thou bind the sweet influences of Pleiades, or loose the bands of Orion?
32 Canst thou bring forth Mazzaroth in his season? or canst thou guide Arcturus with his sons?


One of these ancient constellations was Leo, a group of stars resembling a lion.


On August 21, 2017, a total solar eclipse passed over the United States. The path is shown below. 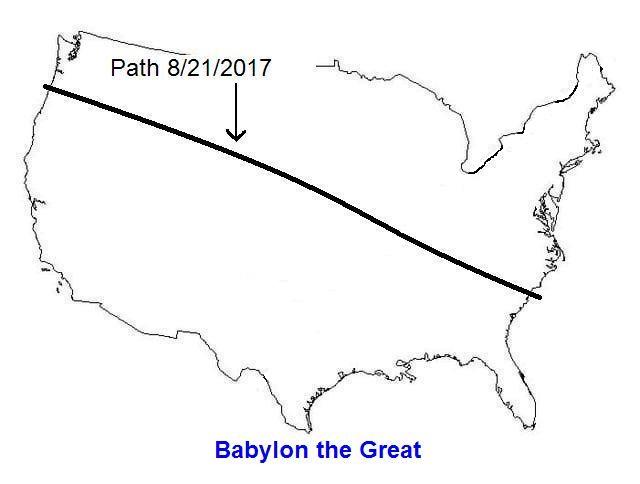 As the sky darkened for viewers in the path of eclipse totality, the constellation of Leo the Lion, Sign of the Tribe of Judah and Israel's Messiah, was present in the sky overhead near the eclipsed sun. The eclipsed sun was positioned near the star Regulus, the King Star. 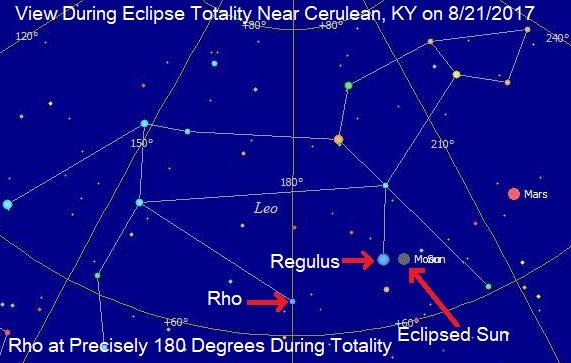 The point of maximum eclipse duration along the eclipse path occurred near Cerulean, KY.


Also during eclipse totality near Cerulean, KY, the star identified as Rho in the constellation appeared to pass precisely through 180 degrees at exactly 18:23:43 UT.


On April 8, 2024 another total solar eclipse will cross over the United States, forming an "X" over the country. 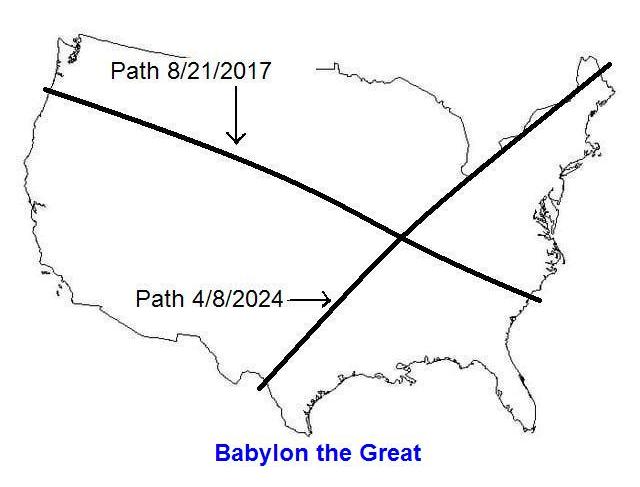 Above: An ancient Paleo Hebrew letter "Tav" will be placed on the United States by our Creator Elohim. The two solar eclipse paths will cross just south of Carbondale, IL, a region known locally as "Little Egypt".


Jerusalem, Israel, is the only city on the face of the earth that YaHuWaH Elohim has named as being His special possession, His city.


On 4/8/2024 as the second solar eclipse in the graphic above passes over the United States, the constellation pictured below will be present in the sky overhead in Jerusalem. 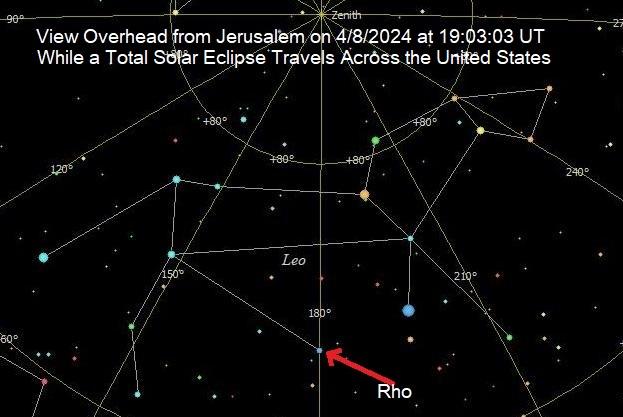 During the total solar eclipse of 4/8/2024 over the United States, the Sign of the tribe of Judah and Israel's Messiah will be present in the sky overhead.


On August 2, 2027, a total solar eclipse will pass directly over the Kaaba in Mecca, Saudi Arabia. 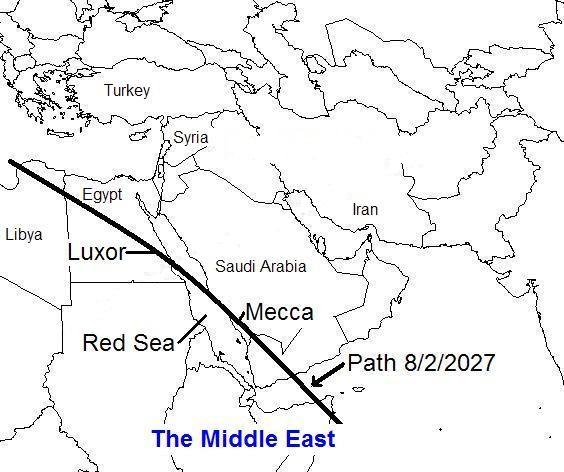 During the total solar eclipse of 8/2/2027, the constellation pictured below will be present overhead for viewers in the Muslim Kaaba in Mecca, Saudi Arabia.

In the graphic above, Jupiter the King planet and Regulus the King star appear side by side as the banner of Israel's Messiah, the Lion of Judah, is present in the darkened sky.


Only in Mecca during eclipse totality will the King star Regulus appear to pass through 153 degrees. This will not happen anywhere else along the path of eclipse totality.


The number 153 is the 17th triangular number, and is mentioned in John chapter 21 concerning Jesus and the catch of 153 fish.


The number 153 was known among ancient Greeks as the Vesica Pisces, the symbol of a fish, and a method used to derive the mathematical square root of three using the ratio 265/153.

The Vesica Pisces remains a symbol of Christianity still today.


On August 2, 2027, Regulus the King star will pass precisely through 153 degrees at 10:27:35 UT over the Kaaba during eclipse totality. This action was ordained by our Creator YaHuWaH Elohim in order to bear witness to the Muslim faithful that Jesus Christ is truly Israel's Messiah, the Lion of Judah. The King planet Jupiter will be found standing near Regulus the King star as a second witness during the eclipse.


On March 20, 2034 a second total solar eclipse will pass over the Middle East region as the Creator finishes placing an ancient Paleo Hebrew "Tav", end mark, on the region. 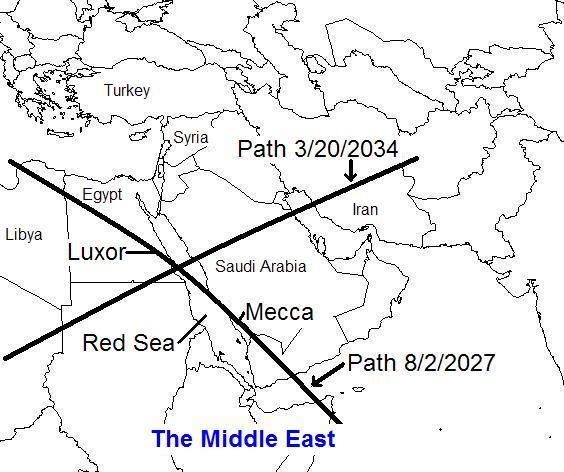 On August 12, 2045, a total solar eclipse will pass over the United States. The path is shown below. 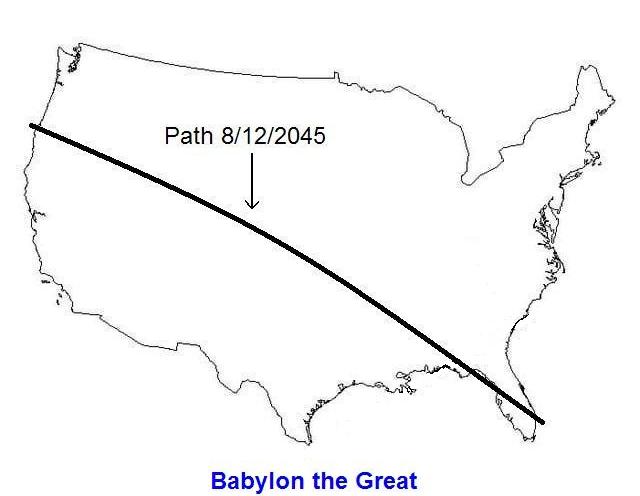 As the sky darkens for viewers in the path of eclipse totality on 8/12/2045, the constellation of Leo the Lion, Sign of the Tribe of Judah and Israel's Messiah, will be present in the sky overhead near the eclipsed sun. 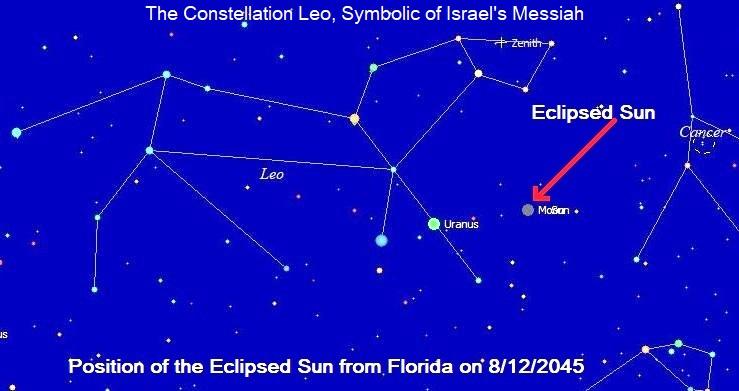 On March 30, 2052 another total solar eclipse will cross over the United States, again forming an "X" over the country. Double unto Babylon. 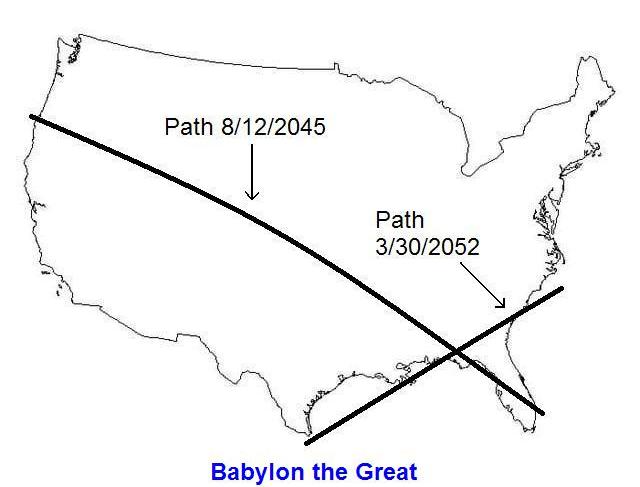 As the Creator places an "X" again over the United States, the sign of Israel's Messiah appears in the sky over Jerusalem. 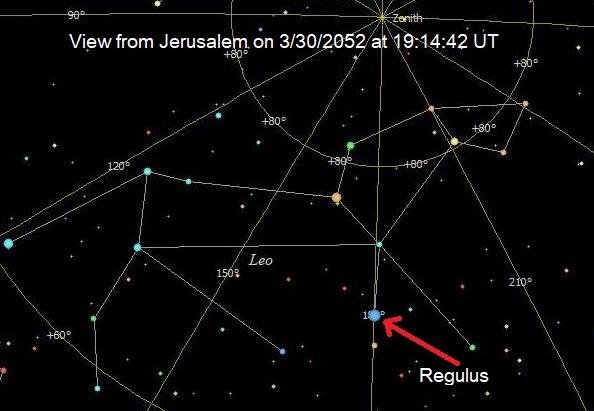 In Jerusalem Nisan1, the biblical new year, has just begun after sunset and the sign of Israel's Messiah, the Lion of Judah, is present in the sky overhead as the total solar eclipse of 3/30/2052 begins to cross the United States.


In the United States, the path of eclipse totality passes over a small portion of the Gulf of Mexico on its way to Florida, after previously making first landfall in the United States on the Mississippi Delta. At this time, between the Mississippi Delta landfall and Florida landfall, the King star Regulus precisely moves through 180 degrees at 19:14:42 UT as seen by viewers in Jerusalem.


There are many "coincidences" listed above. Not all are listed below.


2. The symbol on Judah's banner is that of a lion.


3. Israel's Messiah was prophesied to come from Bethlehem, Judah.


4. Jesus Christ was born in Bethlehem, and His followers came to be symbolized by a "fish" and the number 153.


5. The "X" Paleo Tavs (ancient end marks) shown above are rare astronomical events. The beginning and ending eclipses are all spaced 2422 days apart, and each ending eclipse that completes each "Tav" marks the occurrence of Nissan 1, the beginning of the Hebrew biblical year. Example: Nisan 1 on the Jewish Hillel calendar is 3/31/2052. In the graphic just above, it is after sunset in Jerusalem and Nisan 1 has already begun while the solar eclipse of 3/30/2052 is just beginning to cross the United States thousands of miles away.


6. There is the coincidence of the star Rho in the constellation of Leo passing precisely through 180 degrees during the both the eclipse of 8/21/2017 and its companion eclipse of 4/8/2024. One of the 180 degree events occurring over the United States and the other occurring over Jerusalem, being separated by 2422 days.


7. There will be a solar eclipse passing directly over the Kaaba in Mecca, home of the Muslim faith, on August 2, 2027. The banner of Judah flying over the Kaaba? Could there be a message in the sky for someone somewhere? Must be just another coincidence.